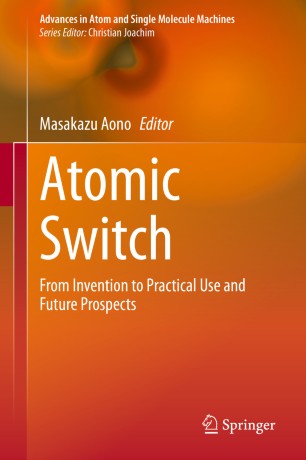 From Invention to Practical Use and Future Prospects

Written by the inventors and leading experts of this new field, the book results from the International Symposium on “Atomic Switch: Invention, Practical use and Future Prospects” which took place in Tsukuba, Japan on March 27th - 28th, 2017. The book chapters cover the different trends from the science and technology of atomic switches to their applications like brain-type information processing, artificial intelligence (AI) and completely novel functional electronic nanodevices. The current practical uses of the atomic switch are also described. As compared with the conventional semiconductor transistor switch, the atomic switch is more compact (~1/10) with much lower power consumption (~1/10) and scarcely influenced by strong electromagnetic noise and radiation including cosmic rays in space (~1/100). As such, this book is of interest to researchers, scholars and students willing to explore new materials, to refine the nanofabrication methods and to explore new and efficient device architectures.

Masakazu Aono obtained his Ph. D from University of Tokyo in 1972 and then joined the National Institute for Research in Inorganic Materials (NIRIM). In 1986, he moved to RIKEN as a Chief Scientist and organized/operated the Surface and Interface Laboratory until 2002 (in the meantime, from 1996 to 2002, he worked as a Professor at Osaka University). In 2002, he moved to the National Institute for Materials Science (NIMS) as the Director of Nanomaterials Laboratory (NML). From 2007 to 2017, he organized/operated the International Center for Materials Nanoarchitectonics (MANA) in NIMS as its Director. At present, he is an Executive Advisor of MANA and is also a Distinguished Chair Professor of the Department of Materials Science and Engineering, National Taiwan University (NTU). He is known as a pioneer of nanoscale science and technology, due to his various original achievements such as the initiation of impact-collision ion scattering spectroscopy (ICISS) for surface atomic arrangement analysis, the multiprobe STM/AFMs for nanoscale electrical conductivity measurements, reversible control of local nanochemical reactions and the invention and development of the “Atomic Switch” among others.