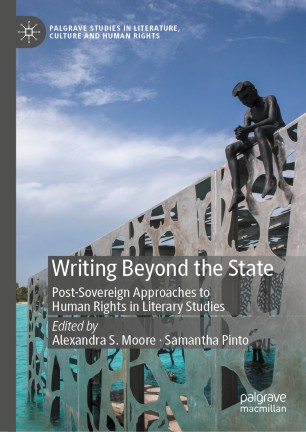 Writing Beyond the State

“This compelling and timely collection reworks the conflict between human rights and state sovereignty. The rich and varied essays invoke emergent cultural forms and political strategies to generate new imaginaries of justice in an age of transnationalism.”

​This book investigates the imaginative capacities of literature, art and culture as sites for reimagining human rights, addressing deep historical and structural forms of belonging and unbelonging; the rise of xenophobia, neoliberal governance, and securitization that result in the purposeful precaritization of marginalized populations; ecological damage that threatens us all, yet the burdens of which are distributed unequally; and the possibility of decolonial and posthuman approaches to rights discourses. The book starts from the premise that there are deep-seated limits to the political possibilities of state and individual sovereignty in terms of protecting human rights around the world. The essays explore how different forms, materials, perspectives, and aesthetics can help reveal the limits of normative human rights and contribute to the cultural production of new human rights imaginaries beyond the borders of state and self.

Alexandra S. Moore is Professor of English and Co-Director of the Human Rights Institute at Binghamton University, USA. Her most recent publications include the monograph Vulnerability and Security in Human Rights Literature and Visual Culture (2016) and several co-edited collections—Witnessing Torture: Perspectives of Survivors and Human Rights Workers (with Swanson, 2018); The Routledge Companion to Literature and Human Rights (with McClennen, 2015); and Teaching Human Rights in Literary and Cultural Studies (with Goldberg, 2015). Her current research focus is on cultural representations of rendition, torture, and indefinite detention in the war on terror.

Samantha Pinto is Associate Professor of English at the University of Texas at Austin, USA. Her book Difficult Diasporas: The Transnational Feminist Aesthetic of the Black Atlantic (NYU Press, 2013) was the winner of the 2013 William Sanders Scarborough Prize for African American Literature and Culture from the MLA. Her second book, Infamous Bodies (2020), explores the relationship between 18th- and 19th-century black women celebrities and discourses of race, gender and human rights. Currently, she is at work on her third book on race, embodiment, and scientific discourse in African American and African Diaspora culture.