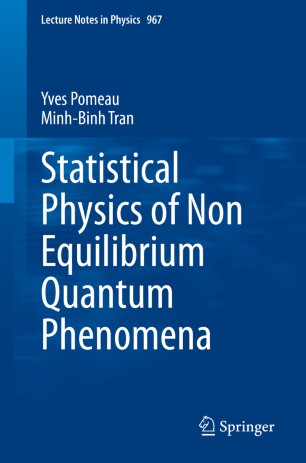 This book provides an introduction to topics in non-equilibrium quantum statistical physics for both mathematicians and theoretical physicists. The first part introduces a kinetic equation, of Kolmogorov type, which is needed to describe an isolated atom (actually, in experiments, an ion) under the effect of a classical pumping electromagnetic field which keeps the atom in its excited state(s) together with the random emission of fluorescence photons which put it back into its ground state. The quantum kinetic theory developed in the second part is an extension of Boltzmann's classical (non-quantum) kinetic theory of a dilute gas of quantum bosons. This is the source of many interesting fundamental questions, particularly because, if the temperature is low enough, such a gas is known to have at equilibrium a transition, the Bose–Einstein transition, where a finite portion of the particles stay in the quantum ground state. An important question considered is how a Bose gas condensate develops in time if its energy is initially low enough.

After studies at Ecole normale supérieure (ENS Paris), Yves Pomeau finished his PhD in Plasma Physics, at Université Paris 11 in 1970. He has been one of the leaders of statistical physics with many awards and prizes: Ricard Prize (highest prize) of the French Physical Society-1985, Prize Perronnet-Bettancourt of the Government of Spain-1993, Chevalier de la Legion d'Honneur (highest French order of merit)-1991, corresponding member of L’Académie des Sciences Paris-1987, member of L’Académie Catholique de France-2018, Boltzmann Medal (highest distinction in statistical physics)-2016. He was also one of the founders of the Laboratoire de Physique Statistique, ENS Paris.

Minh-Binh Tran finished his PhD in mathematics at Université Paris 13 in 2011. His research is interdisciplinary, with focus on statistical physics, partial differential equations, kinetic theory, machine learning and high performance computing. He has written more than 30 research articles, in collaboration with mathematicians, physicists, chemists and engineers from renown research institutions in the US, Europe and Asia.