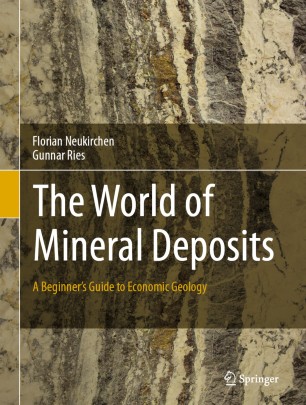 The World of Mineral Deposits

A Beginner's Guide to Economic Geology

This vivid introduction to economic geology not only describes the most important deposit types, but also the processes involved in their formation. Magmatic, hydrothermal and sedimentary processes as well as weathering and alteration are explained in the framework of plate tectonics and the history of the Earth. The chapter about fossil fuels includes unconventional deposits and the much-debated fracking. Other topics covered are exploration, mining and economic aspects like commodity prices.

Florian Neukirchen is a mineralogist and non-fiction author. After his studies in Freiburg, he worked on alkaline rocks at the University of Tübingen. Research trips led him to Oldoinyo Lengai in Tanzania, through the High Atlas in Morocco and to the Ilimaussaq intrusion in Greenland. He currently lives and writes in Berlin. Several of his books on geology have been published in German.

Gunnar Ries studied mineralogy in Hamburg. His interest in the weathering behavior of East African carbonatites led him to Uganda and Tanzania. He works at CRB Analyse Service GmbH in Hardegsen, and in his spare time he blogs about geoscientific topics on Scilogs.com.