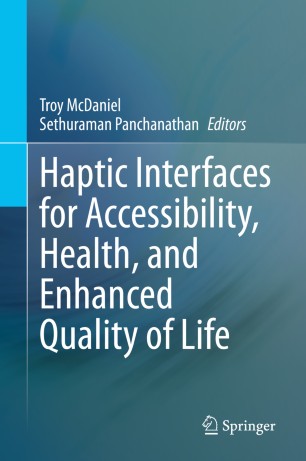 Haptic Interfaces for Accessibility, Health, and Enhanced Quality of Life

This book is the first resource to provide in-depth coverage on topical areas of assistive, rehabilitative, and health-related applications for haptic (touch-based) technologies. Application topics are grouped into thematic areas spanning haptic devices for sensory impairments, health and well-being, and physical impairments which are illustrated in this book. A diverse group of experts in the field were invited to contribute different chapters to provide complementary and multidisciplinary perspectives. Unlike other books on haptics, which focus on human haptic perception, specific modalities of haptics (e.g., realistic haptic rendering), or broadly cover the subfields of haptics, this book takes an application-oriented approach to present a tour of how the field of haptics has been advanced with respect to important, impactful thematic focuses.
Under Theme 1 “Sensory Impairments”, haptics technologies to support individuals with sensory impairments is presented which includes: Spatial awareness in sensory impairments through touch; Haptically-assisted interfaces for persons with visual impairments; and Enabling learning experiences for visually impaired children by interaction design. Under Theme 2 “Haptics for Health and Well-Being”, haptics technologies aimed at supporting exercise and healthy aging will be covered including: Haptics in rehabilitation, exergames and health; Therapeutic haptics for mental health and well-being; and Applications of haptics in medicine. Under Theme 3 “Haptics for Physical Impairments”, haptics technologies for enhancing the quality of life for individuals with weakened/impaired limbs or neurological diseases impacting movement is targeted including: Assistive soft exoskeletons with pneumatic artificial muscles; Haptics for accessibility in rehabilitative hardware; and intelligent robotics and immersive displays for enhancing haptic interaction in physical rehabilitation environments.
Engineers, scientists, and researchers working in the areas of haptics, multimedia, virtual/augmented/mixed-reality, human-computer interaction, assistive technologies, rehabilitative technologies, healthcare technologies, and/or actuator design will want to purchase this book. Advanced level students and hobbyists interested in haptics will also be interested in this book.

Troy McDaniel is an Assistant Professor in the Polytechnic School at Arizona State University. He is the Director of the HAPT-X Laboratory and Co-Director of the Center for Cognitive Ubiquitous Computing at ASU. His research interests span the areas of haptic interfaces, wearable robotics, smart cities, human-computer interaction, and machine learning, especially for haptics. He is particularly interested in tactile vision sensory substitution, haptic human augmentation, and multimodal integration. His current research explores how information traditionally presented visually and/or aurally may be presented haptically through novel touch-based interfaces. His current application areas are assistive technologies for individuals with sensory impairments and rehabilitative technologies for individuals with physical impairments. Within these applications, he is exploring new haptic interaction paradigms and novel mappings between modalities to convey information in alternative ways. He is also actively exploring challenges of accessibility and health & well being within Smart Cities and Smart Living application spaces using a citizen-centered approach. He is a member of the Institute of Electrical and Electronics Engineers (IEEE) and the Association for Computing Machinery (ACM).
Sethuraman “Panch” Panchanathan leads the knowledge enterprise at Arizona State University, which advances research, innovation, strategic partnerships, entrepreneurship, global and economic development at ASU. He is the Director of the Center for Cognitive Ubiquitous Computing at ASU. Panchanathan’s research interests are in the areas of human-centered multimedia computing, haptic user interfaces, person-centered tools and ubiquitous computing technologies for enhancing the quality of life for individuals with disabilities, machine learning for multimedia applications, medical image processing, and media processor designs. Panchanathan has published more than 500 papers in refereed journals and conferences and has mentored nearly 150 graduate students, post-docs, research engineers and research scientists who occupy leading positions in academia and industry. He was the editor-in-chief of the IEEE Multimedia Magazine, and is also an editor/associate editor of several international journals and transactions. Panchanathan was appointed by President Barack Obama to the U.S. National Science Board for a six-year term and was appointed by the U.S. Secretary of Commerce to the National Advisory Council on Innovation and Entrepreneurship. Panchanathan is a fellow and Vice President for Strategic Initiatives and Membership of the National Academy of Inventors. In 2018, Panchanathan was appointed Arizona Governor Doug Ducey’s Senior Advisor for Science & Technology. Panchanathan is a Fellow of the NAI, American Association for the Advancement of Science (AAAS), the Canadian Academy of Engineering (CAE), the Institute of Electrical and Electronics Engineers (IEEE) and the Society of Optical Engineering (SPIE).