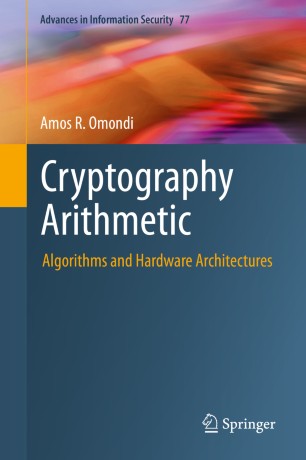 Modern cryptosystems, used in numerous applications that require secrecy or privacy - electronic mail, financial transactions, medical-record keeping, government affairs, social media etc. - are based on sophisticated mathematics and algorithms that in implementation involve much computer arithmetic. And for speed it is necessary that the arithmetic be realized at the hardware (chip) level. This book is an introduction to the implementation of cryptosystems at that level.
The aforementioned arithmetic is mostly the arithmetic of finite fields, and the book is essentially one on the arithmetic of prime fields and binary fields in the context of cryptography. The book has three main parts. The first part is on generic algorithms and hardware architectures for the basic arithmetic operations: addition, subtraction, multiplication, and division. The second part is on the arithmetic of prime fields. And the third part is on the arithmetic of binary fields. The mathematical fundamentals necessary for the latter two parts are included, as are descriptions of various types of cryptosystems, to provide appropriate context.
This book is intended for advanced-level students in Computer Science, Computer Engineering, and Electrical and Electronic Engineering. Practitioners too will find it useful, as will those with a general interest in "hard" applications of mathematics.

Amos Omondi received a Ph.D. degree in Computer Science from the University of North Carolina at Chapel Hill. Since then he has had a lengthy academic career, teaching at universities in the USA, Europe, Oceania, and Asia. He is currently a professor in the Department of Computer Science at the State University of New York in Korea, the global campus of  Stony Brook University (USA).
He is the author of several books, including three on computer arithmetic: Computer Arithmetic Systems (Prentice-Hall, 1994), Residue Number Systems (Imperial College Press, 2007), and Computer-Hardware Evaluation of Mathematical Functions (Imperial College Press, 2015).