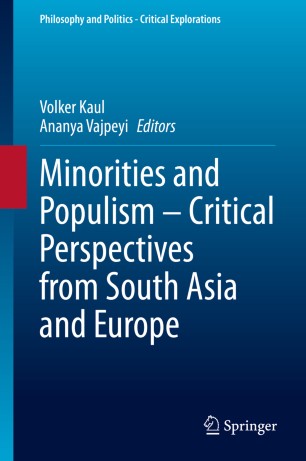 Minorities and Populism – Critical Perspectives from South Asia and Europe

This volume assembles renowned scholars to address, for the first time, the relationship between minorities and populism in South Asia and Europe from a critical perspective. Despite the very different and to some extent opposite historical and political trajectories, there is today a convergence on nationalist affirmation and on majoritarian politics between South Asia and Europe. In India, the Hindu majority rebels against wide-ranging minority rights anchored in the Constitution. In Europe, the refugee crisis and Islamic radicalization bring to the forefront the postcolonial legacy. Despite all rhetoric, there are obvious dangers of majoritarianism. Populist parties are divisive, partisan, disregard minority rights, engage in lynching, social division, stigmatization and exclusion, turning minorities into second-class citizens.

There is a profound structural connection between minorities and the current rise of populism in India and Europe. But there remains a deep perplexity and also anxiety: Does the presence of minorities necessarily have to trigger majoritarian policies? Are there no solutions to this dilemma? Many observers considered multicultural policies and affirmative action programs in India as a possible model for Europe to adopt in order to achieve greater integration. But eventually they seem to have failed. Why so? Are multiculturalism and the recognition of differences still options today? On the other hand, most scholars in India typically reject the European model of liberal democracy and secularism as impracticable in India and locate the reason for the current malaise in the west. But is liberal democracy really so bad in dealing with pluralism?

This volume, collecting a selection of the Reset DOC Venice-Padua-Delhi dialogue series, is going to answer two fundamental questions. First, what precisely is the nexus between minorities and populism in South Asia and Europe? Starting from those case studies, the authors will also draw some general theoretical inferences about the nature of populism. Secondly, given the dangers of populism for minorities, the volume will look for the most adequate and feasible solutions.

Volker Kaul teaches at the Department of Political Science at LUISS 'Guido Carli' University in Rome and is research associate at the observatory LUISS ETHOS. He is also lecturer at the CEA Rome Center. Moreover, he works as scientific coordinator of the Istanbul/Venice Seminars for Reset-Dialogues on Civilizations. His work focuses on the nexus between identity and politics. In 2016, he published together with Seyla Benhabib a book entitled Toward New Democratic Imaginaries – Istanbul Seminars on Islam, Culture and Politics for Springer. He is co-editing since 2010 a yearly special issue of the journal Philosophy & Social Criticism on issues related to culture, religion and politics. He has another forthcoming book with Ingrid Salvatore on What is Pluralism? for Routledge.

Ananya Vajpeyi is a Fellow and Associate Professor at the Centre for the Study of Developing Societies, New Delhi. In 2019-20 she is a Visiting Fellow at the Centre for Research in the Arts, Social Sciences and Humanities (CRASSH) at the University of Cambridge. She works at the intersection of intellectual history, political theory and critical philology. She is the author of Righteous Republic: The Political Foundations of Modern India (Harvard University Press, 2012) and Prolegomena to the Study of People and Places in Violent India (WISCOMP, 2007), as well as the co-editor of Ashis Nandy: A Life in Dissent (Oxford University Press, 2018).