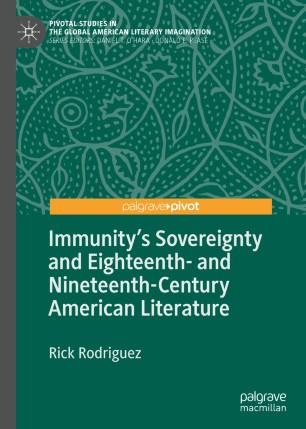 Immunity’s Sovereignty and Eighteenth- and Nineteenth-Century American Literature tracks flashpoint events in U.S. history, constituting a genealogy of the effectiveness and resilience of the concept of immunity in democratic culture. Rick Rodriguez argues that following the American Revolution the former colonies found themselves subject to foreign and domestic threats imperiling their independence. Wars with North African regencies, responses to the Haitian revolution, reactions to the specter and reality of slave rebellion in the antebellum South, and plans to acquire Cuba to ease tensions between the states all constituted immunizing responses that helped define the conceptual and aesthetic protocols by which the U.S. represented itself to itself and to the world’s nations as distinct, exemplary, and vulnerable. Rodriguez examines these events as expressions of an immunitary logic that was—and still is— frequently deployed to legitimate state authority. Rodriguez identifies contradictions in literary texts’ dramatizations of these transnational events and their attending threats, revealing how democracy’s exposure to its own fragility serves as rationale for immunity’s sovereignty. This book shows how early U.S. literature, often conceived as a delivery system for American exceptionalism, is in effect critical of such immunitary discourses.