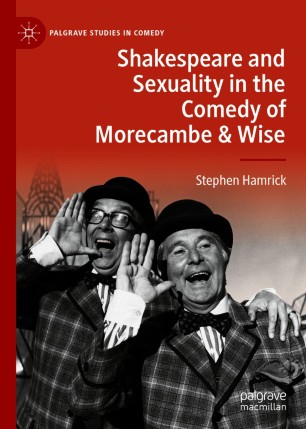 Shakespeare and Sexuality in the Comedy of Morecambe & Wise

Contextualizing the duo’s work within British comedy, Shakespeare criticism, the history of sexuality, and their own historical moment, this book offers the first sustained analysis of the 20th Century’s most successful double-act.  Over the course of a forty-four-year career (1940-1984), Eric Morecambe & Ernie Wise appropriated snippets of verse, scenes, and other elements from seventeen of Shakespeare’s plays more than one-hundred-and-fifty times.  Fashioning a kinder, more inclusive world, they deployed a vast array of elements connected to Shakespeare, his life, and institutions.

Rejecting claims that they offer only nostalgic escapism, Hamrick analyses their work within contemporary contexts, including their engagement with many forms and genres, including Variety, the heritage industry, journalism, and more.  ‘The Boys’ deploy Shakespeare to work through issues of class, sexuality, and violence.  Lesbianism, drag, gay marriage, and a queer aesthetics emerge, helping to normalise homosexuality and complicate masculinity in the ‘permissive’ 1960s.

Professor Stephen Hamrick, Minnesota State University Moorhead, USA, teaches British literature, religion and literature, speculative literatures, history, and writing. In addition to work on the English Reformations and Tottel’s Miscellany, Hamrick has published on George Gascoigne and Queen Elizabeth, Mary Tudor, and Lodowick Lloyd.  He has edited two collections, George Gascoigne (2008) and Tottel’s Songes and Sonettes in Context (2013). He is the author of The Catholic Imaginary and the Cults of Elizabeth, 1558-1582 (2009).

“For fans of the much loved British comedians and scholars of comedy alike, Stephen Hamrick has pulled together a rich study that traces Morecambe and Wise's unique takes on the comic potential raised by the (other) double act of sex and Shakespeare. A fun and informative look at bawd and the Bard as Eric and Ern's comic inspirations.” (Dr Ian Wilkie, Editor of Comedy Studies)

“This book is extremely well-researched and represents a welcome addition to the generally under-represented field of Variety and so called ‘low comedy’ within comedy writing generally. The book presents a novel and entertaining point of view that certainly deserves a wider audience.” (Dr David James, Senior Lecturer of Film & Media Studies, Manchester Metropolitan University)