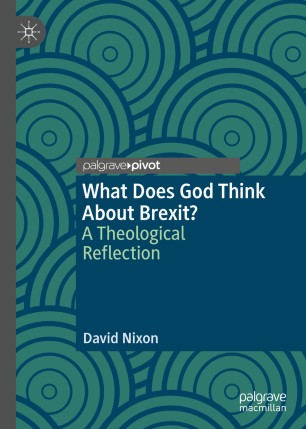 What Does God Think About Brexit?

This book is a theological reflection about the process and event of Brexit: Britain’s departure from the European Union. Within a framework of liberation and postmodern theology, it examines Brexit against a history of the EU, with themes of community, identity, marriage, and divorce. It considers the emotional reactions which have been generated, and places Brexit in the context of contemporary populism and the politics of the United States. The book concludes with a call for reconciliation via new imaginaries of solidarity and inclusion.

Revd Dr. David Nixon is an Anglican priest who has worked in parishes, university chaplaincy, and theological education. He is currently Rector of St. Thomas Exeter, in the County of Devon, UK and an Honorary Research Fellow at the University of Exeter. His research interests have focused on marginalization and vulnerability, including a theology of homelessness. He has published numerous scholarly articles in theological and educational journals about sexualities, urban deprivation, and ministerial priesthood.

“David Nixon provides an excellent introduction to American readers about what’s happening with Brexit, and its similarities and differences with current US politics. His theological analysis is both innovative and insightful, drawing on Liberation Theology to explore the subject in a far more rigorous way than is often portrayed in the British press and, dare I say it, in parliamentary debate. He shows how theological reflection is an essential tool by which Christians can engage deeply with important issues of our age and make a constructive contribution to them.” (The Rev'd Canon Carl F. Turner, Rector of Saint Thomas Church Fifth Avenue, New York, and formerly Precentor of Exeter Cathedral, UK, and Acting-Dean during the Occupy movement)
“David Nixon is a fresh, compelling, engaging voice who takes the key political and social question of our times and creates a frame which is illuminating and clarifying. Nixon is becoming Britain’s Public Theologian in the tradition of Reinhold Niebuhr. For anyone seeking to make sense of the complexity of Brexit, this is the book to read.” (The Very Rev. Ian S. Markham, Ph.D. Dean and President of Virginia Theological Seminary, USA)

“Under the heading of 'Brexit' all sorts of issues concerning the kind of society we want come together. These need theological reflection, and David Nixon provides a welcome attempt to do this.” (Tim Gorringe, Professor Emeritus, University of Exeter, UK)

“Nixon’s insightful analysis shows that taking difference seriously means not imputing bad motives to those on the “other side” of Brexit, whatever our own persuasions might be. A passionate but not uncritical pro-European, Nixon shows that reconciliation within British society will be possible but costly. Radical theologies of inclusion are shown to go beyond what either Leavers or Remainers have thus far imagined.” (Susannah Cornwall, Senior Lecturer in Constructive Theologies and Director of EXCEPT, University of Exeter, UK)

“This timely study sets out a rich and attentive theological reflection on the current, clearly era-defining moment in British social and political life. His insights and imperatives grounded in a liberation theology ‘twisted’ by interactions with queer theory, intersectionality, and late modern/postmodern critical theory, Nixon offers perspectives which allow theology to speak to and critique the phenomenon of Brexit and its lived implications and which invite the same in the reverse direction. His insistence that it is only from a position of openness to reciprocal illumination and in the exercise of well-honed imagination that theology can do meaningful work in the world is apt in the context of Brexit and well beyond.” (Jon Morgan, Director of the Centre for Theology, Imagination and Culture, Sarum College, UK)