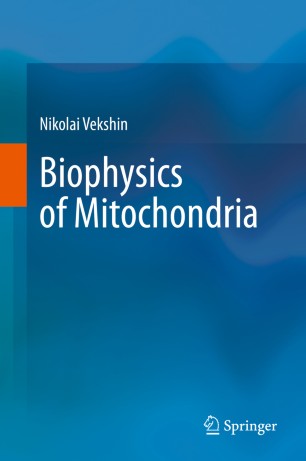 In this monograph, the author -Head researcher at the Institute of Cell Biophysics of Russian Academy of Sciences- discusses the results of his own long-term studies of mitochondria as well as alternative points of view and experiments of other important researchers in the field. The monograph contains the main aspects of mitochondrial research by a number of physical methods: fluorescence spectroscopy, UV-vis spectrophotometry, IR spectroscopy, light-scattering, optical microscopy, fluorescence microscopy, colorimetry, photobleaching, polarography, among others. The monograph is very useful for researchers and graduate students specializing in mitochondrial biophysics, biochemistry, molecular biology and cytology. The book was published in Russian in 2019 by Photon Publishers (Pushchino, Moscow region).

N.L Vekshin is a specialist in biophysical methods and mitochondria. He has authored approximately 200 papers and 8 books (in Russian and English), including "Energy Transfer in Macromolecules" (SPIE, Bellingham, 1997), "Photonics of Biopolymers" (Springer, Berlin, 2002), "Biophysics of DNA-antibiotic complexes" (Nova, N.Y. 2011), "Fluorescence Spectroscopy of Biomacromolecules" (Lambert, 2012).