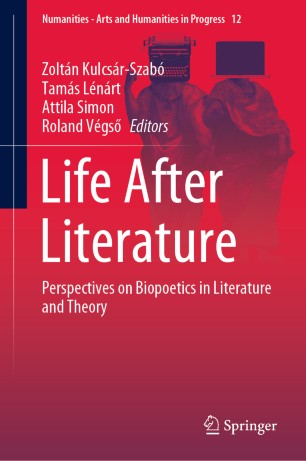 Perspectives on Biopoetics in Literature and Theory

Part of the Numanities - Arts and Humanities in Progress book series (NAHP, volume 12)

This book offers innovative investigations of the concept of life in art and in theory. It features essays that explore biopoetics and look at how insights from the natural sciences shape research within the humanities. Since literature, works of art, and other cultural products decisively shape our ideas of what it means to be human, the contributors to this volume examine the question of what literature, literary and cultural criticism, and philosophy contribute to the distinctions (or non-distinctions) between human, animal, and vegetal existence.

Coverage combines different methodological aspects and addresses a wide field of comparative literary studies. The essays consider the question of language (as a distinctive feature of human existence) in a number of different contexts, which range from Aristotle’s works, through several historical layers of the philosophical discourse on the origins of speech, to modern anthropology, and 20th century continental philosophy. In addition, the volume includes concrete case studies to the current post-humanism debate and provides literary, art historian, and philosophical perspectives on animal studies.

The historical multiplicity of the various cultural representations of biological existence (be that human, animal, vegetal, or mixed) might serve as a productive foundation for discussing the nature and forms of literature’s critical contributions to our understanding of these fundamental categories. This volume opens up this subject to students and scholars of literature, art, philosophy, ethics, and cultural studies, and to anyone with a theoretical interest in the questions of life.

Zoltán Kulcsár-Szabó is currently Professor and Head of the Department of Comparative Literature and Cultural Studies at Eötvös Loránd University (ELTE) in Budapest. Main fields of research: lyric theory, deconstructive criticism, political theory, performativity, Hungarian and German literature of the 20th and 21st centuries. He has published monographs in Hungarian and co-edited several volumes, among them Transfer and Translation (Budapest 2002) and Signaturen des Geschehens (Bielefeld 2014). His book A gondolkodás háborúi (Budapest: Ráció, 2014) deals with the discourse of violence and power in political philosophy and literature in the first half of the 20th century. His most recent publication Szinonímiák (Budapest: Ráció, 2016) addresses Martin Heidegger’s late work, concentrating on issues of materiality, technicity, aesthetics and translation.

Tamás Lénárt attended Eötvös Loránd University (ELTE), Faculty of Humanities. He has a master’s degree in Hungarian and German Studies. He earned his doctorate (Ph.D.) degree with his thesis on photography and literature at the General Literary Studies and Cultural Studies Literary Program in 2012. He is assistant professor at the Institute of Hungarian Literature and Cultural Studies, ELTE.  His main research areas are post-war Hungarian literature, media theory, and visual studies in literature.

Attila Simon earned his Ph.D. with a thesis on Aristotle’s aesthetics. He is Associate Professor at the Department of Comparative Literature and Cultural Studies at the Eötvös Loránd University, Budapest, where he teaches literary and critical theory and ancient literature. His primary research interests are ancient Greek drama and theatre, as well as ancient and contemporary literary theory with a focus on questions of culture and media. He is the author of 2 books in Hungarian and translator of Plato’s Phaedrus and Cicero’s The Laws. In addition, he published several articles in refereed journals and edited volumes as well as translations of philosophical essays (from English and German into Hungarian). He is currently working on a book on Aristotle’s practical philosophy as a kind of existential hermeneutics.

Roland Végső is Susan J. Rosowski Associate Professor of English at the University of Nebraska-Lincoln, where he teaches literary and critical theory and twentieth-century literatures. His primary research interests are contemporary continental philosophy, modernism, and translation theory. He is the author of The Naked Communist: Cold War Modernism and the Politics of Popular Culture (Fordham UP, 2013). In addition, he is also the translator of numerous philosophical essays as well as two books: Rodolphe Gasché’s Georges Bataille: Phenomenology and Phantasmatology (Stanford UP, 2012) and Peter Szendy’s All Ears: The Aesthetics of Espionage (Fordham UP, 2016). He is the co-editor of the book series Provocations published by University of Nebraska Press. He is currently completing a book manuscript devoted the problem of “worldlessness” (Weltlosigkeit) in post-Heideggerian continental philosophy