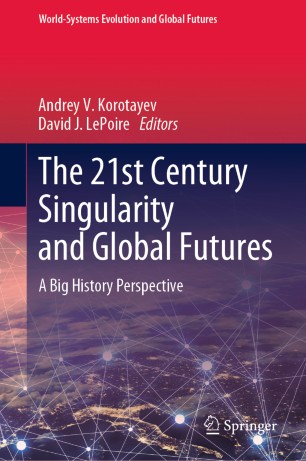 This book introduces a 'Big History' perspective to understand the acceleration of social, technological and economic trends towards a near-term singularity, marking a radical turning point in the evolution of our planet. It traces the emergence of accelerating innovation rates through global history and highlights major historical transformations throughout the evolution of life, humans, and civilization. The authors pursue an interdisciplinary approach, also drawing on concepts from physics and evolutionary biology, to offer potential models of the underlying mechanisms driving this acceleration, along with potential clues on how it might progress.
The contributions gathered here are divided into five parts, the first of which studies historical mega-trends in relation to a variety of aspects including technology, population, energy, and information. The second part is dedicated to a variety of models that can help understand the potential mechanisms, and support extrapolation. In turn, the third part explores various potential future scenarios, along with the paths and decisions that are required. The fourth part presents philosophical perspectives on the potential deeper meaning and implications of the trend towards singularity, while the fifth and last part discusses the implications of the Search for Extraterrestrial Intelligence (SETI). Given its scope, the book will appeal to scholars from various disciplines interested in historical trends, technological change and evolutionary processes.

Andrey V. Korotayev heads the Laboratory for the Monitoring of Sociopolitical Destabilization Risks at the National Research University Higher School of Economics, Moscow, Russia. He is also a Senior Research Professor at the Institute of Oriental Studies and Institute for African Studies, Russian Academy of Sciences. He is the author/co-author of over 300 scholarly publications, including “Great Divergence and Great Convergence. A Global Perspective” (Springer, 2015) and “Economic Cycles and Crises, and the Global Periphery” (Springer, 2016). He is also one of the coordinators of the Russian Academy of Sciences Presidium Project ‘Complex System Analysis and Mathematical Modeling of Global Dynamics.’ He received a ‘Best Economists of the Russian Academy of Sciences’ nomination in 2006, and was awarded the Gold Kondratieff Medal by the International N. D. Kondratieff Foundation in 2012.

David J. LePoire holds a PhD in Computer Science from DePaul University, Chicago, USA, and a BS in Physics from CalTech.  He has worked in environmental and energy areas for many governmental agencies over the past 25 years. Topics include uncertainty techniques, pathway analysis, particle detection tools, and physics-based modeling.  He has also investigated historical trends in energy, science, and environmental transitions. His research interests include complex adaptive systems, logistical transitions, the role of energy and environment in history, and the application of new technologies to resolve current energy and environmental issues.