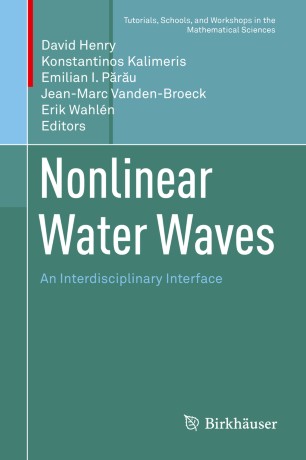 Part of the Tutorials, Schools, and Workshops in the Mathematical Sciences book series (TSWMS)

The motion of water is governed by a set of mathematical equations which are extremely complicated and intractable. This is not surprising when one considers the highly diverse and intricate physical phenomena which may be exhibited by a given body of water. Recent mathematical advances have enabled researchers to make major progress in this field, reflected in the topics featured in this volume.

Cutting-edge techniques and tools from mathematical analysis have generated strong rigorous results concerning the qualitative and quantitative physical properties of solutions of the governing equations. Furthermore, accurate numerical computations of fully-nonlinear steady and unsteady water waves in two and three dimensions have contributed to the discovery of new types of waves. Model equations have been derived in the long-wave and modulational regime using Hamiltonian formulations and solved numerically.

This book brings together interdisciplinary researchers working in the field of nonlinear water waves, whose contributions range from survey articles to new research results which address a variety of aspects in nonlinear water waves. It is motivated by a workshop which was organised at the Erwin Schrödinger International Institute for Mathematics and Physics in Vienna, November 27-December 7, 2017. The key aim of the workshop was to describe, and foster, new approaches to research in this field. This is reflected in the contents of this book, which is aimed to stimulate both experienced researchers and students alike.