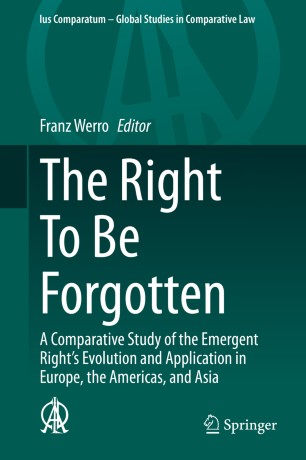 The Right To Be Forgotten

A Comparative Study of the Emergent Right's Evolution and Application in Europe, the Americas, and Asia

This book examines the right to be forgotten and finds that this right enjoys recognition mostly in jurisdictions where privacy interests impose limits on freedom of expression. According to its traditional understanding, this right gives individuals the possibility to preclude the media from revealing personal facts that are no longer newsworthy, at least where no other interest prevails. Cases sanctioning this understanding still abound in a number of countries. In today’s world, however, the right to be forgotten has evolved, and it appears in a more multi-faceted way. It can involve for instance also the right to access, control and even erase personal data. Of course, these prerogatives depend on various factors and competing interests, of both private and public nature, which again require careful balancing. Due to ongoing technological evolution, it is likely that the right to be forgotten in some of its new manifestations will become increasingly relevant in our societies.

Professor Dr. Franz Werro shares his life between the Faculté de droit of the University of Fribourg (Switzerland) and Georgetown Law (Washington, DC). He teaches and researches in different fields of private law, including the law of contract, privacy law, European private law and comparative law. He was a visiting professor at the Cornell Law School (Ithaca, NY) and at a number of European Law schools, including the Universita degli Studi di Trieste (Italy), the Scuola Superiore Santa Anna in Pisa (Italy), the University of Pau (France), the University of Bordeaux (France), the International University College of Torino (Italy), the Bucerius Law School in Hamburg (Germany), the Sorbonne in Paris (France), the Tel-Aviv University (Israel) and Hebrew University (Israel). In addition, Professor Werro acts as an arbitrator and as a consultant in Swiss and international commercial disputes. Since 2014, he has served as served as one of the Editors-in-Chief of the American Journal of Comparative Law.