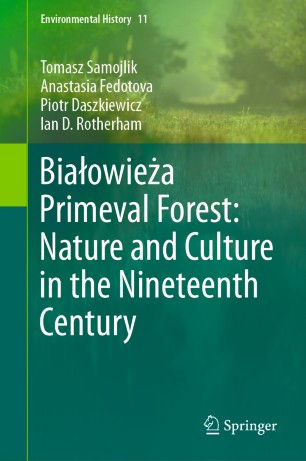 Białowieża Primeval Forest: Nature and Culture in the Nineteenth Century

Understanding the current state and dynamics of any forest is impossible without recognizing its history. Białowieża Primeval Forest (BPF), located on the border between Poland and Belarus, is one of the best preserved European lowland forests and a subject of myriads of works focusing on countless aspects of its biology, ecology, and management. After few centuries (14th-18th) of protection as a royal forest and game reserve of Polish kings and Lithuanian grand dukes, the forest fell under the rule of Russian state and later (since 1888) - under personal ownership of Russian tsars. During the long 19th century many of “older” ways of multi-functional utilisation of the forest (haymaking, bee-keeping, cattle pasturing, etc.) underwent changes in accordance with the requirements of the new administration and principles of “rational” forestry. They were put under tighter control, or even fell under the ban. However, attempts at introducing the “rational” forestry in the last refugium of European bison were hindered by numerous obstacles. The entire long 19th century (in this case 1795-1915) in the history of BPF is a story of struggle between “traditional” use, new administrative trends in forest and game management and the rising perception of the primeval or pristine forest.

The book shows the historical background and the outcome of this struggle: BPF’s history in the long 19th century focusing on tracking all cultural imprints, both material (cultural landscapes, introduced alien species, human-induced processes) and immaterial(traditional knowledge of forest and use of forest resources, the political and cultural significance of the forest, scientific research) that shaped the state and picture of one of the last truly wild forests of Europe.

Tomasz Samojlik is an environmental historian pursuing the goal of retracing the history of anthropogenic and natural forest changes in the former Grand Duchy of Lithuania, including Poland’s Białowieża Primeval Forest. He has a MSc in European studies from University of Marie Curie-Skłodowska in Lublin and a PhD in biological sciences from Jagiellonian University in Kraków. His current research topics encompass (1) the history of exploitation and protection of BPF in the 19th century, (2) fire history of BPF, (3) past eco-cultural landscapes in the royal forests of the Grand Duchy of Lithuania and their bio-cultural heritage, (4) man-wildlife interactions in the historical context. His work combines archival studies and archaeological excavations (in cooperation with the Institute of Archaeology and Ethnology of Polish Academy of Sciences in Warsaw), with the analyses of the human impact on past forest ecosystems.

Anastasia Fedotova is a senior researcher at St. Petersburg’s Branch of Institute for the History of Science and Technology of the Russian Academy of Sciences. Her research interests incorporate (1) scientific knowledge in the rationalization of agriculture and forestry, (2) environmental history, (3) history of the life and earth sciences: plant ecology, applied botany, agricultural entomology, forest ecology, and soil science in the 19th and first half of the 20th century.

Professor Ian D. Rotherham is the author of over 400 academic papers, popular and professional articles, books and book chapters, as well as 300 consultancy studies and reports, and over 300 newspaper features. He has broadcast on radio and television in Britain, the USA and in Europe, and writes regular columns for local and regional newspapers and has a regular BBC Radio Sheffield phone-in. He works and researches environmental, historical and tourism issues around the world, and chaos national and international meetings and committees. Along with his core ecological research, his pioneering work on the perceptions and history of alien and exotic species has been widely acclaimed. His research on landscape history has led to a ground breaking handbook on ancient woodland heritage, and a series of books on wetland loss and the history of peat and peat cutting.

Prof. Piotr Daszkiewicz, dr habil. in biology and professor in humanities at the Institute for the History of Science, Polish Academy of Sciences, for many years connected with the Natural History Museum in Paris, currently working at Agence Française pour la Biodiversité combines his biological and historical background in his research. His studies embrace a wide variety of topics, from the history of natural sciences, through history of research in Białowieża Primeval Forest and studies on European bison, history of natural collections and museums all around the world, to topics focusing on current and past Polish-French scientific collaboration. For many years, he published articles in “Kultura”, the most important Polish emigration journal edited by Jerzy Giedroyc.