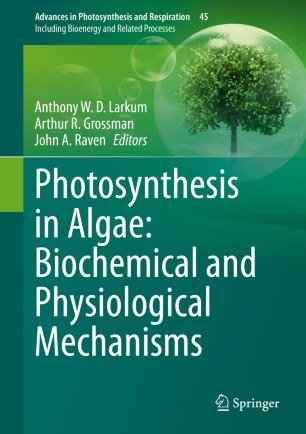 Part of the Advances in Photosynthesis and Respiration book series (AIPH, volume 45)

Algae, including cyanobacteria, are in the spotlight today for a number of reasons; firstly it has become abundantly clear over recent years that algae have been neglected in terms of basic research and that knowledge gap is being rapidly closed with the establishment of some surprising discoveries, such as the presence of Near-Infra-Red-Absorbing cyanobacteria and a wealth of natural products; secondly molecular approaches have provided a wealth of approaches to genetically modify algae and produce value-added products; thirdly it has become clear just how important, marine phytoplankton is to global carbon capture and the production of food globally; and fourthly, it has also become clear that algae present unparalleled opportunities to generate biofuels in a sustainable and non-polluting way.

This volume presents 15 chapters by world experts on their subjects, ranging from reviews of algal diversity and genetics to in-depth reviews of special algal groups such as diatoms (which account for over 30% of marine carbon capture). Other chapters chart the ways in which this carbon capture occurs or how there are a multiplicity of ways in which algae intercept sun light and deploy this energy for carbon capture. A fascinating aspect here is the way in which sun light is harvested. A special chapter is devoted to the very recent and exciting possibility that algae use coherent light energy transformation to enhance the efficiency of light capture, an aspect of quantum physics that has implications for future developments at several levels and a variety of industries. Just how and why algae use Chlorophyll a as the major light capture pigment is discussed in several chapters. However, attention is also given to those cyanobacteria, which have been found to use the special Near-Infra Red absorbing chlorophylls mentioned above. And attention is also given to those algae that employ phycobiliproteins to fill in the “green window”, i.e., the spectral region from 400 – 650 nm, which is not efficiently covered by chlorophyll and carotenoid pigments. Photoinhibition and photoprotection is the subject area of several chapters and one which it is essential to understand a we work towards greater efficiency of algal photosynthesis. A final chapter is devoted to understanding the molecular basis for coral bleaching, a much-neglected area that is essential in trying to come up with solutions to this very worrying phenomenon, caused by global warming and ocean acidification.

This is a book for research scientists, environmentalists, planners in a range of areas including those of marine resources, nutrient control and pollution of water bodies and that growing body of concerned citizens interested in controlling carbon emissions and global warming. Special attention has been given to generating a set of articles that will be read by university students, informed laymen and all those whose wish to understand the rapid changes that have come about in our knowledge of algae over the past decade.

Anthony (Tony) Larkum is Emeritus Professor at the University of Sydney, Australia, where he was a staff member in plant sciences for 25 years. He has had a distinguished career in plant physiology, marine biology and phylogenetics. In addition, he has published a book on Charles Darwin and his cousin, William Darwin Fox, entitled a Natural Calling (Springer Verlag). One of the first scientists to apply underwater techniques, he has contributed over a wide range of fields to advancing the study of underwater organisms, including cyanobacteria, marine algae, seagrasses and corals. In addition to this he has contributed extensively to the field of light-harvesting and photoinhibtion in photosynthetic organisms, having published many papers, a number of reviews and several books on the subject. Overall, he has published 254 papers in scientific journals; and these have an h-index of 65 (35 since 2014). His most cited papers are on coral bleaching in corals (632) and the discovery of fluorescent pigments in corals (590). And his third most cited work is for co-editing a book on seagrasses (Biology, Ecology and Conservation, Springer) in 2006. The current book is the culmination of a life time of work in the many fields of photosynthesis in cyanobacteria, eukaryotic algae and seagrasses. His contribution to these fields has been acknowledged by awards, election to scientific committees and boards of scientific journals over the years. He is currently on the Editorial Committee of the Royal Society Journal, Interface.

Arthur Robert Grossman Arthur Grossman has been a Staff Scientist at The Carnegie Institution for Science, Department of Plant Biology since 1982, and holds a courtesy appointment as Professor in the Department of Biology at Stanford University. He has performed research across fields ranging from plant biology, microbiology, marine biology, ecology, genomics, engineering and photosynthesis and initiated large scale algal genomics by leading the Chlamydomonas genome project. In 2002 he received the Darbaker Prize (Botanical Society of America) for work on microalgae and in 2009 received the Gilbert Morgan Smith Medal (National Academy of Sciences) for the quality of his publications on marine and freshwater algae. In 2017 he was Chair of the Gordon Research Conference on Photosynthesis and gave the Arnon endowed lecture on photosynthesis in Berkeley in March of 2017. He has given numerous plenary lectures and received a number of fellowships throughout his career, including the Visiting Scientist Fellowship - Department of Life and Environmental Sciences (DiSVA), Università Politecnica delle Marche (UNIVPM) (Italy, 2014), the Lady Davis Fellowship (Israel, 2011) and most recently the Chaire Edmond de Rothschild (to work IBPC in Paris in 2017-2018). He has been Co-Editor in Chief of Journal of Phycology and has served on the editorial boards of many well-respected biological journals including the Annual Review of Genetics, Plant Physiology, Eukaryotic Cell, Journal of Biological Chemistry, Molecular Plant, and Current Genetics. He has also served on scientific advisory boards for both nonprofit and for profit companies including Phoenix Bioinformatics, Exelixis, Martek Biosciences, Solazyme/TerraVia, Checkerspot and Phycoil.

John Raven FRS is an Emeritus Professor at the University of Dundee UK, an Honorary Fellow of the James Hutton Institute UK, a Visiting Professor at the University of Technology Sydney, and an Adjunct Professor at the University of Western Australia. He has wide research interests, including astrobiology, bioenergetics, biogeochemistry, ecophysiology, evolutionary biology and palaeobiology. The majority of his publications have involved studies on algae. He has published 482 scientific papers (Web of Science, 30 July 2019), and is a Clavirate Analytics Highly Cited Researcher in the Cross Field research area. Among his contributions to our knowledge of algal photosynthesis are studies of inorganic carbon acquisition mechanisms in the laboratory and in nature, photosynthetic electron flow pathways other than from water to carbon dioxide, interactions of photosynthetic and respiratory reactions in organismal bioenergetics, and the extremes of photon flux density at which algal photosynthesis and photolithotrophic growth can occur.