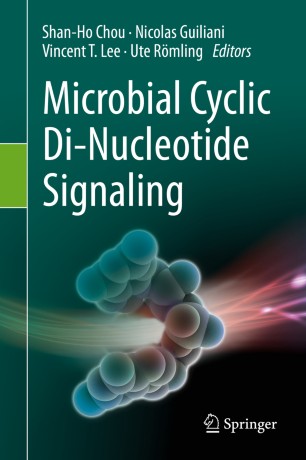 In turn, the various aspects of bacterial physiology affected by these signaling systems– e.g. biofilm formation and dispersal, the cell cycle, motility, virulence, production of antimicrobials, fundamental metabolism and osmohomeostasis – are discussed in detail in the context of different microorganisms. Dedicated chapters focus on the population diversity of cyclic dinucleotide signaling systems, their tendency to be horizontally transferred, the cyclic di-GMP signaling system in the social amoeba Dictyostelium, honorary cyclic (di)nucleotides, and the development of strategies for interfering with cyclic dinucleotide signaling in order to manipulate microbial behavior.

Taken together, the chapters provide an authoritative source of information for a broad readership: beginners and advanced researchers from various disciplines; individuals seeking a broad overview of cyclic di-nucleotide signaling; and those who want to learn more about specific aspects. Also featuring reviews with a forward-looking perspective, the book offers a valuable source of inspiration for future research directions.

Shan-Ho Chou is currently a chair professor of the Institute of Biochemistry, National Chung Hsing University, Taiwan. He received his bachelor’s degree in chemistry from the National Taiwan Normal University, a master’s degree in biochemistry from the National Taiwan University, and a Ph.D. in chemistry from the University of Washington in Seattle, WA. He has been interested in studying protein and unusual nucleic acid complex structures and found several stable nucleic acid structures different from the WC base-paired duplex, which were published in several review papers in the Journal of Molecular Biology, Nucleic Acids Research and Trends in Biochemistry. He is now combining X-ray, nuclear magnetic resonance, and cryo-electron microscopy techniques to study the structures and functions of multi-domain proteins complexed with cyclic di-GMP and cyclic di-AMP.

Nicolas Giuliani received his PhD from the Université Aix-Marseille, France. He is actually full professor of Microbiology and Biotechnology at the Facultad de Ciencias, Universidad de Chile in Santiago, Chile.  His research is focused on the deciphering of molecular events involved in biofilm formation by acidophilic bacteria currently used in biomining processes. Initially focused on the characterization of quorum sensing systems, his research activities are now dealing with cyclic di-nucleotide second messenger signalling and the regulation of exopolysaccharides in Acidithiobacillus species. Nicolas Guiliani was President of the Chilean Society of Microbiology (SOMICH, 2013-2016) and President of the Association of Latinamerican Societies for Microbiology (ALAM, 2016-2018).

Vincent T. Lee is professor of Cell Biology and Molecular Genetics at the University of Maryland at College Park, USA. His long-standing research interests include bacterial pathogenesis, biofilm formation and regulation of microbial physiology by signaling nucleotides. One major focus in his research on signaling nucleotides is the identification of receptors that mediate the down-stream regulation by these signals.

Ute Römling is professor of Microbial Physiology at the Karolinska Institutet in Stockholm, Sweden. Her long-standing research interest is the molecular and epidemiological analysis of biofilm formation in microorganisms with a focus on regulation by cyclic di-nucleotide second messenger signaling, implication of extracellular matrix production and biofilm-host interactions. Another major long-standing research interest concerns the survival and persistence mechanisms of a world-wide predominant clone of Pseudomonas aeruginosa found in patients and aquatic habitats. Ute Römling is a member of the European Academy of Microbiology, AcademiaNet and an adjunct faculty member at the University of Karachi, Pakistan.