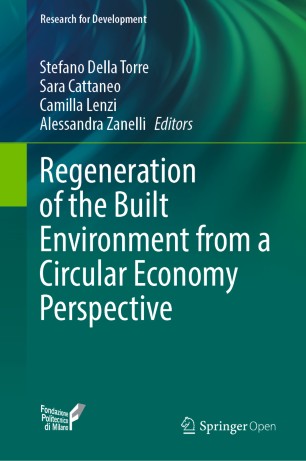 Regeneration of the Built Environment from a Circular Economy Perspective

This open access book explores the strategic importance and advantages of adopting multidisciplinary and multiscalar approaches of inquiry and intervention with respect to the built environment, based on principles of sustainability and circular economy strategies. A series of key challenges are considered in depth from a multidisciplinary perspective, spanning engineering, architecture, and regional and urban economics. These challenges include strategies to relaunch socioeconomic development through regenerative processes, the regeneration of urban spaces from the perspective of resilience, the development and deployment of innovative products and processes in the construction sector in order to comply more fully with the principles of sustainability and circularity, and the development of multiscale approaches to enhance the performance of both the existing building stock and new buildings. The book offers a rich selection of conceptual, empirical, methodological, technical, and case study/project-based research. It will be of value for all who have an interest in regeneration of the built environment from a circular economy perspective.

Stefano Della Torre, who graduated in Civil Engineering and in Architecture, is a Full Professor of Restoration at the Politecnico di Milano in Milan, Italy, and Director of the ABC Department (Architecture, Built Environment and Construction Engineering). He is the author of more than 360 publications. He served as an advisor to the CARIPLO Foundation (Cultural Districts), the Italian Government and Lombardy Region (policies on planned conservation of historical-architectural heritage). He has been President of BuildingSMART Italia – the national chapter of BuildingSMART International (2011-2017).

Sara Cattaneo has been Associate Professor of Structural Engineering at Politecnico di Milano since 2011, where she received both her MS and PhD in Structural Engineering. Since 2017 she has also been an Associate at the Construction Technologies Institute, Italian National Research Council (ITC-CNR). Examples of her wide-ranging research interests include fracture and damage of quasi-brittle materials, constitutive behavior, and the structural response of high-performance and self-consolidating concrete. She has been involved in a number of research projects at the national and European levels. Since 1999 she has spent periods at the Department of Civil Engineering of the University of Minnesota (Minneapolis, USA), where she has been a Visiting Professor. She is the author of more than 100 papers in international journals and international conference proceedings and serves as a reviewer for several international journals.

Camilla Lenzi has been an Associate Professor of Regional and Urban Economics at Politecnico di Milano since 2015. She holds a PhD in Economics from the University of Pavia and a Master of Science in Industry and Innovation Analysis from SPRU – University of Sussex, UK. From 2005 to 2008, she was a postdoctoral fellow in the Department of Economics of Bocconi University and CESPRI (now I-CRIOS). Her main research interests are in the fields of regional and innovation studies, urban economics, highly skilled worker mobility, and entrepreneurship.  She has participated in several EU-funded projects and has published in various international refereed journals, such as the Journal of Urban Economics, the Journal of Regional Science, Urban Studies, Regional Studies, Papers in Regional Science, and Small Business Economics.

Alessandra Zanelli is an architect and Associate Professor in the Department of Architecture, Built Environment, and Engineering Construction at Politecnico di Milano, where she teaches for both the School of Architecture, Urbanism, and Construction Engineering and the School of Design. She holds a PhD in the Technology of Architecture and the Environment. Since 2015 she has been coordinator of the Interdepartmental Research Laboratory of Textiles and Polymer Materials. She is also the Regional Representative and an Associate Partner of TensiNet, the thematic network for upgrading the built environment in Europe through tensile structures. She has been involved in many research projects co-financed by national and international bodies, focusing on the sustainable innovation of ultra-lightweight and flexible materials in both architecture and interior design. She is the author of more than 180 publications and holds four international patents.