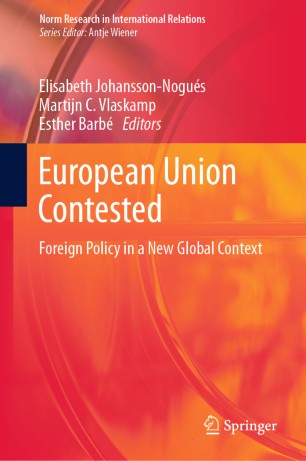 The European Union's foreign policy and its international role are increasingly being contested both globally and at home. At the global level, a growing number of states are now challenging the Western-led liberal order defended by the EU. Large as well as smaller states are vying for more leeway to act out their own communitarian principles on and approaches to sovereignty, security and economic development. At the European level, a similar battle has begun over principles, values and institutions. The most vocal critics have been anti-globalization movements, developmental NGOs, and populist political parties at both extremes of the left-right political spectrum.

This book, based on ten case studies, explores some of the most important current challenges to EU foreign policy norms, whether at the global, glocal or intra-EU level. The case studies cover contestation of the EU's fundamental norms, organizing principles and standardized procedures in relation to the abolition of the death penalty, climate, Responsibility to Protect, peacebuilding, natural resource governance, the International Criminal Court, lethal autonomous weapons systems, trade, the security-development nexus and the use of consensus on foreign policy matters in the European Parliament. The book also theorizes the current norm contestation in terms of the extent to, and conditions under which, the EU foreign policy is being put to the test.

The chapter “India’s ‘Silent Contestation’ of the EU’s Perspective on Local Ownership” is available open access under a Creative Commons Attribution 4.0 International License via link.springer.com.