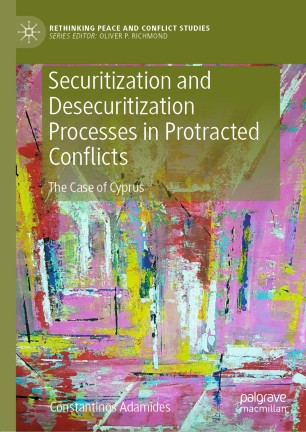 The Case of Cyprus

Using the Cyprus conflict as a case study, this book examines how the securitization process in protracted conflict environments changes, as it becomes routinized and potentially even institutionalized. Furthermore, the process is not limited to the mainstream top-down path, as it also follows a horizontal and even bottom-up direction, which inevitably has an impact on the goals and securitization options of both the mainstream securitizing actors and the audience(s). Lastly, on a theoretical level it examines how the multi-directional securitization forces have an impact on the elite and audience-driven desecuritization efforts and ultimately on the prospects for conflict resolution. The book’s case study, the Cyprus question, offers an alternative reading of the forces dominating the specific conflict, while concurrently offers a useful framework for the study of similar protracted and deeply securitized conflicts.
Constantinos Adamides is Assistant Professor of International Relations and the Director of the Diplomatic Academy at the University of Nicosia, Cyprus. He frequently cooperates with the Ministries of Foreign Affairs, Defence, and the National Guard. He also served as a Member of the first Geostrategic Council of Cyprus (2014-2018).