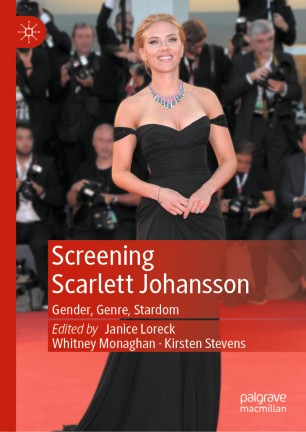 Screening Scarlett Johansson: Gender, Genre, Stardom provides an account of Johansson’s persona, work and stardom, extending from her breakout roles in independent cinema, to contemporary blockbusters, to her self-parodying work in science-fiction. Screening Scarlett Johansson is more than an account of Johansson’s career; it positions Johansson as a point of reference for interrogating how femininity, sexuality, identity and genre play out through a contemporary woman star and the textual manipulations of her image. The chapters in this collection cast a critical eye over the characters Johansson has portrayed, the personas she has inhabited, and how the two intersect and influence one another. They draw out the multitude of meanings generated through and inherent to her performances, specifically looking at processes of transformation, metamorphosis and self-deconstruction depicted in her work.

Janice Loreck lectures in the School of Media, Creative Arts and Social Inquiry at Curtin University, Australia. Her research examines subjectivity, gender representation and authorship in contemporary screen culture. She is the author of Violent Women in Contemporary Cinema (Palgrave Macmillan, 2016).

Whitney Monaghan is an Assistant Lecturer in Film and Screen Studies at Monash University, Australia. She is the author of Queer Girls, Temporality and Screen Media: Not ‘Just a Phase’ (Palgrave Macmillan, 2016) and co-author of Queer Theory Now: From Foundations to Futures (Red Globe Press, 2019) with Hannah McCann.

Kirsten Stevens is Lecturer in Arts and Cultural Management at The University of Melbourne, Australia. Author of the book Australian Film Festivals: Audience, Place and Exhibition Culture (Palgrave Macmillan, 2016), her research engages with media industries in national screen contexts, reception studies, and issues of gender in the cultural industries.