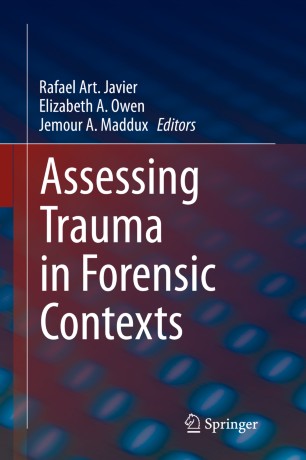 This book examines the different ways that trauma is involved in the lives of those who interact with the justice system, and how trauma can be exacerbated in legal settings.  It includes both victims and perpetrators in providing a perspective on trauma in general, and a framework that will guide those who evaluate and treat individuals in forensic settings. Comprehensive in scope, it covers key areas such as developmental issues, emotions, linguistic and communication difficulties, and special populations such as veterans, immigrants, abused women, incarcerated individuals, and children.  The main objective of this book is to bring trauma to the fore in conducting forensic cases in order to understand these cases in greater depth and to provide appropriate interventions for a range of problems.

“This masterful book, edited by Rafael Art. Javier, Elizabeth Owen and Jemour A. Maddox, is a refreshing, original, and thoughtful response to these needs, demonstrating – beyond any doubt – why lawyers and forensic mental health professionals must be trauma-informed in all of their relevant work.”

Rafael Art. Javier, Ph.D., ABPP is a Professor of Psychology and the Director Inter-agencies Training and Research Initiatives, Director of the Post-Graduate Professional Development Programs and the Director of the Postdoctoral Certificate Programs in Forensic Psychology at St. John’s University. Dr. Javier has presented at national and international conferences, including Europe, Latin and Central America and the Caribbean on psycholinguistic and psychoanalytic issues in research and treatment and on ethnic and cultural issues in psychoanalytic theories and practice, including on issues of violence and the impact on general cognitive and emotional functioning. He has published extensively on the subject including several co-edited books: “Reaching Across Boundaries of Culture and Class,” “Domestic Violence” and “Personality Development and Psychotherapy in our Diverse Society: A Source Book” all published by Jason Aronson. The “Patterns of desire: Sexual diversity in psychoanalysis,” coauthored with Dr. William Herron was published by Nova Science Publishers, Inc. in the spring 2006.  Early in 2007, he was the senior editor for the “Handbook of Adoption: Implications for Researchers, Practitioners and Families,” co-edited with Amanda Baden, Frank Biafora and Alina Camacho-Gingerich, published by Sage Publications.  His book on “The Bilingual mind: Thinking, Feeling and Speaking in two Languages,” was published in 2007 by Springer Publications. His most recent book “The Specialty competencies in Psychoanalysis in Psychology” was published in 2015 by Oxford University Press written with Dolores Morris and William Herron. His most recent book on “Understanding Domestic Violence: Theories, challenges, Remedies,” co-edited with William Herron was published in 2018 by Rowman and Littlefield where the issue of trauma was front and center.

He is on the editorial board of the Journal of Psycholinguistic Research, the Journal of Social Distress and the Homeless, and the Journal of Infant, Child and Adolescent Psychotherapy. He is the Editor-in-Chief for the Journal of Psycholinguistic Research and the past co-editor of the Journal of the Journal of Social Distress and the Homeless.  His current research activities include issues of violence and moral development, suicide in adolescents and young adults, and bilingualism. He holds a diplomate in clinical psychology by the American Board of Professional Psychology and another diplomate in psychoanalysis by the same board. He is visiting professor at the Universidad de la Cuenca del Plata, in Corrientes, Argentina and appointed “Profesor Honorario” by that university in March 2016.  He is past President of the Forensic Division of the New York State Psychological Association.  He is in private practice that has included forensic involvements for over 30 years.

Elizabeth Owen, Ph.D. is the Director of the Queens Forensic Psychiatric Evaluation Court Clinic.    Earlier positions include being the Director of the Department of Forensic Psychiatry of Kings County Hospital Center, providing assessment and treatment to detainees on Rikers Island, as well as the Queens and Brooklyn Houses of Detention. A graduate of Columbia University’s Clinical Psychology Doctoral program, she is an Adjunct Assistant Professor at Columbia, and an Adjunct Professor at St. John’s University, teaching courses in the areas of psychopathology, forensic psychology, and clinical applications of social psychology.  Dr. Owen has performed numerous evaluations in her 19 years of practice, testified frequently, and been deemed an expert in Clinical and Forensic Psychology in city, state, federal and immigration courts in New York.  She has worked closely with the Mayor’s Office of Criminal Justice in New York City to help revolutionize the way competency evaluations are performed and processed in Queens County.  She is past president of the Forensic Division of the New York State Psychological Association and will again be president in 2020.   Publication topics include competency to stand trial, sovereign citizens, and how attorneys can best work as stand-by counsel.  Extremist groups are a particular area of interest.

Jemour Maddux, Psy.D., ABPP is the Managing Director of Lamb and Maddux, LLC. Office of Psychological Services, Court Advisory Center. He is board certified in forensic psychology by the American Board of Professional Psychology, and is a Fellow of the American Academy of Forensic Psychology. His areas of interest include the assessment of harm, risk and various abilities in family, civil, and police and public safety contexts. Primarily focused upon forensic practice, Dr. Maddux is an experienced evaluator having completed over 3,000 evaluations and affidavits. He has served on multiple national committees charged with developing various policy statements and practice guidelines used by forensic practitioners throughout the United States. Dr. Maddux is a board member of the American Professional Society on the Abuse of Children (APSAC), which is the nation’s leading professional organization for child-maltreatment professionals. He is also a past President of the Forensic Division of the New York State Psychological Association.

“This masterful book, edited by Rafael Art. Javier, Elizabeth Owen and Jemour A. Maddox, is a refreshing, original, and thoughtful response to these needs, demonstrating – beyond any doubt – why lawyers and forensic mental health professionals must be trauma-informed in all of their relevant work.” (Michael L. Perlin, Esq., New York Law School)
Buy options