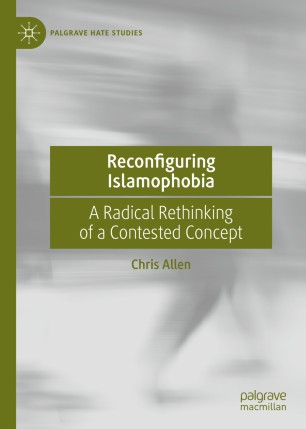 A Radical Rethinking of a Contested Concept

Chris Allen is Associate Professor in Hate Studies in the Department of Criminology at the University of Leicester, UK.

“This is a timely and significant contribution to our understanding of Islamophobia. Reconfiguring Islamaphobia: A Radical Rethinking of a Contested Concept provides new and informed insights related to Islamophobia as a discriminatory phenomenon in the public, political and scholarly spaces. Written by Chris Allen, leading international expert, the book demonstrates how Islamophobia is not merely a discriminatory phenomenon but also a highly political and politicised phenomenon. The book deploys a unique methodological approach including robust empirical data and ‘insider’ experiences in order to demonstrate the real and tangible manifestations of Islamophobia and thus reconfigure Islamophobia as a public and political phenomenon. I highly recommend it as essential reading for students, academics and practitioners interested in this subject” (Irene Zempi, Senior Lecturer in Criminology at Nottingham Trent University, UK)
Buy options