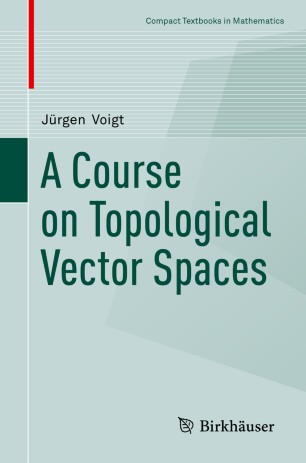 A Course on Topological Vector Spaces

This book provides an introduction to the theory of topological vector spaces, with a focus on locally convex spaces. It discusses topologies in dual pairs, culminating in the Mackey-Arens theorem, and also examines the properties of the weak topology on Banach spaces, for instance Banach’s theorem on weak*-closed subspaces on the dual of a Banach space (alias the Krein-Smulian theorem), the Eberlein-Smulian theorem, Krein’s theorem on the closed convex hull of weakly compact sets in a Banach space, and the Dunford-Pettis theorem characterising weak compactness in L1-spaces. Lastly, it addresses topics such as the locally convex final topology, with the application to test functions D(Ω) and the space of distributions, and the Krein-Milman theorem.

The book adopts an “economic” approach to interesting topics, and avoids exploring all the arising side topics. Written in a concise mathematical style, it is intended primarily for advanced graduate students with a background in elementary functional analysis, but is also useful as a reference text for established mathematicians.

Jürgen Voigt is Professor at the Institute of Analysis of the Technische Universität in Dresden, Germany.

“The book may be highly recommended to all students and researchers with some knowledge of Banach or Hilbert space oriented functional analysis who want to learn its general abstract foundations.” (Jochen Wengenroth, zbMATH 1453.46001, 2021)