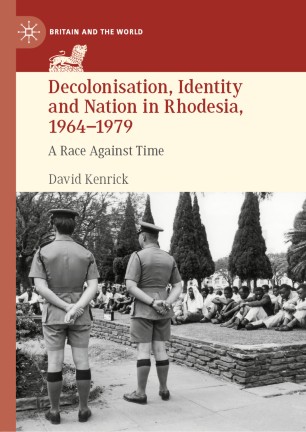 Decolonisation, Identity and Nation in Rhodesia, 1964-1979

A Race Against Time

‘David Kenrick’s book is a fresh and fascinating new history of the Rhodesian rebellion as seen through the symbols and artifacts of the break-away settler nation. With a careful attention to historical context and a keen eye for detail, Kenrick tells the stories of how the most important symbols of Rhodesian nationhood were invented, celebrated, and preserved during their fifteen-year rebellion. … This wholly original and imaginative work will be of interest to many scholars beyond merely historians of southern Africa.’

This book explores concepts of decolonisation, identity, and nation in the white settler society of Rhodesia (now Zimbabwe) between 1964 and 1979. It considers how white settlers used the past to make claims of authority in the present. It investigates the white Rhodesian state’s attempts to assert its independence from Britain and develop a Rhodesian national identity by changing Rhodesia’s old colonial symbols, and examines how the meaning of these national symbols changed over time. Finally, the book offers insights into the role of race in Rhodesian national identity, showing how portrayals of a ‘timeless’ black population were highly dependent upon circumstance and reflective of white settler anxieties. Using a comparative approach, the book shows parallels between Rhodesia and other settler societies, as well as other post-colonial nation-states and even metropoles, as themes and narratives of decolonisation travelled around the world.