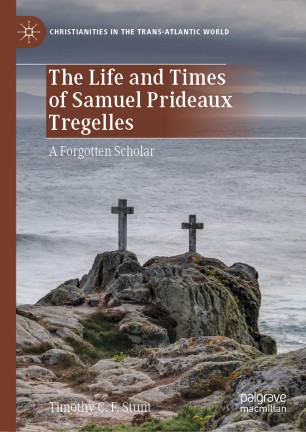 The Life and Times of Samuel Prideaux Tregelles

This book sheds light on the career of Samuel Prideaux Tregelles, and in doing so touches on numerous aspects of nineteenth-century British and European religious history.  Several recent scholars have celebrated the 200th anniversary of the German textual critic Tischendorf but Tregelles, his contemporary English rival, has been neglected, despite his achievements being comparable. In addition to his decisive contribution to Biblical textual scholarship, this study of Tregelles’ career sheds light on developments among Quakers in the period, and Tregelles’s enthusiastic involvement with the early nineteenth-century Welsh literary renaissance usefully supplements recent studies on Iolo Morganwg. The early career of Tregelles also gives valuable fresh detail to the origins of the Plymouth Brethren, (in both England and Italy) the study of whose early history has become more extensive over the last twenty years. The whole of Tregelles’s career therefore illuminates neglected aspects of Victorian religious life.