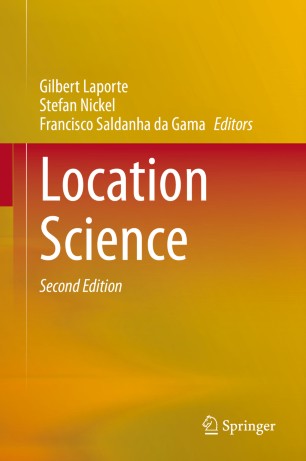 This book presents essential information on modern location science – in a word, all you need to know about location. The second edition of this handbook has been fully revised throughout, with numerous updates and chapters added, to offer an even more comprehensive overview of methods and applications.

The book is divided into three parts: basic concepts, advanced concepts and applications. Written by the most respected specialists in the field and thoroughly reviewed by the editors, it first lays out the fundamental problems in location science and provides readers with basic background information on location theory. Part II covers advanced models and concepts, broadening and expanding on the content presented in Part I. It also discusses important tools to help readers grasp and solve real-world location problems. Part III focuses on the links between location science and other areas like GIS, telecommunications, healthcare, rapid transit networks, districting problems and disaster events, and presents a wide range of applications to allow readers to understand the role of facility location in such areas and learn how to handle real-world location problems.

The book is intended for researchers working on theory and applications involving location problems and models. It is also suitable as a textbook for graduate courses on facility location.

Gilbert Laporte obtained his Ph.D. in Operations Research from the London School of Economics in 1975. He is Professor of Operations Research at HEC Montréal, Canada Research Chair in Distribution Management. He has been Editor of Transportation Science, Computers & Operations Research and INFOR. He has authored or coauthored 19 books, as well as more than 550 scientific articles in combinatorial optimization, mostly in the areas of vehicle routing, location and timetabling. He has received many scientific awards including the Pergamon Prize (United Kingdom) in 1987, the 1994 Merit Award of the Canadian Operational Research Society, and the CORS Practice Prize on four occasions. He has been a member of the Royal Society of Canada since 1998, Fellow of INFORMS since 2005, and foreign member of the National Academy of Engineering (United States) since 2019. In 2009, he received the Robert M. Herman Lifetime Achievement Award in Transportation Science from the Transportation Science and Logistics Society of INFORMS. In 2014, he obtained the Lifetime Achievement in Location Analysis Award from the Section on Location Analysis of INFORMS. In 2018 he became a member of the Order of Canada.

Stefan Nickel is a full professor at the Karlsruhe Institute of Technology - KIT (Germany) and one of the directors of the Institute of Operations Research. He obtained his PhD in mathematics at the Technical University of Kaiserslautern (Germany) in 1995. From 2014–2016 he was the dean of the Department of Economics and Management at the KIT. He was also member of the scientific advisory board as well as of the management board of the Fraunhofer Institute for Applied Mathematics (ITWM) in Kaiserslautern from 2004–2016. Since 2011 he additionally holds the positions of one of the directors of the Karlsruhe Service Research Institute (KSRI) and of the FZI Research Center for Information Technology. From 2006–2015 he was editor-in-chief of Computers & Operations Research. Since 2016 he is editor-in-chief of Operations Research for Health Care. He has coordinated the Health Care working group within the German OR society (GOR) and has been the president of GOR from 2013–2014. Moreover, he was coordinator of the EURO working group on locational analysis. Since 2019 Stefan Nickel serves as VP IFORS in the EURO executive committee and is member of the AC of IFORS. He has authored or co-authored 5 books as well as more than 130 scientific articles in his research areas location analysis, supply chain management, health care logistics, and online optimization. He has been awarded the EURO prize for the best EJOR review paper (2012) and the Elsevier prize for the EJOR top cited article 2007-2011. In addition, he conducted several industry projects with well-known companies such as Bosch, BASF, Lufthansa, Miele, or SAP.

Francisco Saldanha da Gama is professor of Operations Research at the Department of Statistics and Operations Research at the Faculty of Science, University of Lisbon, where he received his Ph.D. in 2002. He has extensively published papers in scientific international journals mostly in the areas of location analysis, supply chain management, logistics and combinatorial optimization. Together with Stefan Nickel, he has been awarded the EURO prize for the best EJOR review paper (2012) and the Elsevier prize for the EJOR top cited article 2007–2011 (2012), both with the paper entitled ”Facility location and supply chain management—A review”. He is member of various international scientific organizations such as the EURO Working Group on Location Analysis of which he is one the past coordinators. Currently, he is editor-in-chief of Computers & Operations Research. His research interests include stochastic mixed integer optimization, location theory and project scheduling.