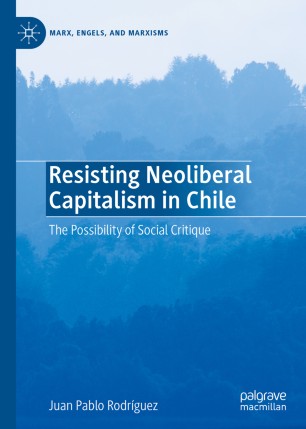 The Possibility of Social Critique

This book explores the relationship between recent theoretical debates around the fate of critique of neoliberal capitalism and critical theory, on the one hand, and the critical theories generated in and by social movements in Chile, on the other. By taking the idea of social critique as a field that encompasses both critical social theories and the practices of social criticism carried out by social movements, Resisting Neoliberal Capitalism in Chile explore how the student and the Pobladores movements map, resist and contest neoliberal capitalism in commodified areas such as education and housing in Chile, one of the first ‘neoliberal experiments’ in Latin America and the world.
Juan Pablo Rodríguez received an M.A in Social and Political Thought from the University of Birmingham (2010) and a PhD in Sociology from the University of Bristol (2018). He has worked as researcher and part-time lecturer in Chilean universities, teaching modules on classic, modern and contemporary sociological theory, political sociology and social movements. Juan Pablo Rodríguez’s research interests includes social theory, neo and post Marxism, and social movements, especially contemporary housing, student and socio-environmental movements. He is currently an honorary research associate at the University of Bristol and a visiting postdoctoral research fellow at the Latin American Centre (LAC), University of Oxford.