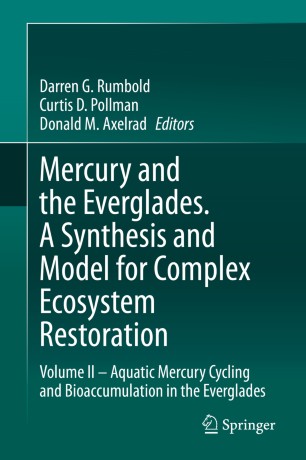 Mercury and the Everglades. A Synthesis and Model for Complex Ecosystem Restoration

Volume II – Aquatic Mercury Cycling and Bioaccumulation in the Everglades

This book integrates 30 years of mercury research in the Florida Everglades to inform scientists and policy makers. The Everglades is an iconic ecosystem by virtue of its expanse; diversity of biota; and multiple international designations. Despite this, the Everglades has been subjected to multiple threats including: habitat loss, hydrologic alterations, invasive species and altered water quality.  Less well recognized as a threat to Everglades human use and wildlife populations is the toxic metal, mercury.
The first half of Volume II focuses on biogeochemistry and factors unique to the Everglades that make it extraordinarily susceptible to mercury methylation following its deposition: warm subtropical climate, shallow depth, high levels of dissolved organic matter, sulfate contamination, nutrient enrichment and sediment redox conditions (for review of atmospheric mercury deposition significance, see Vol. I). The second half of Volume II answers the “so what” question – why biomagnification of the methylmercury produced in the Everglades is a threat to the health of top predators including humans.  The results of the synthesis presented in Volume II suggest that the mercury problem in the Florida Everglades is one of the worst in the world due to its areal extent and the degree of risk to ecological receptors and humans.