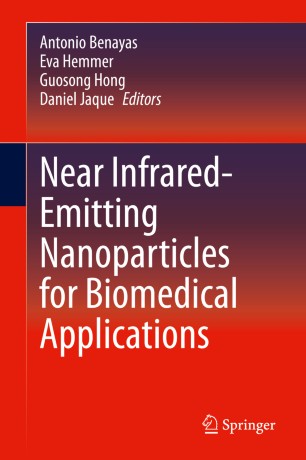 Near Infrared-Emitting Nanoparticles for Biomedical Applications

This book analyzes and evaluates the growing field of light-emitting nanoprobes as contrast agents for in vivo imaging and sensing. It is a comprehensive resource that critically analyzes the state of the art in an interdisciplinary manner, with a special focus on the shift of emission wavelengths into the near-infrared (NIR) spectral region (ranging from 0.7 to 2 microns), which has greatly contributed to the latest advances in biomedical imaging and sensing. This book discusses merits of different contrast agents at nanoscale, and how their unique chemical and structural properties lead to the emission and interaction of light within the NIR window. Both the NIR-emitting materials and various surface modification strategies governing their interactions with the biological system at the “nano” level are discussed. Furthermore, different experimental techniques and protocols for NIR-light-based in vivo imaging and sensing are addressed to shed light on further understanding of the advantages and limitations of each category of these nanoprobes.

Antonio Benayas currently holds a Researcher position at Aveiro Institute of Materials (University of Aveiro, Portugal), funded through a Marie Skłodowska-Curie Action from the European Commission. In the first segment of this international project, he worked for almost two years as a Visiting Scholar at the Stanford School of Medicine. Dr. Benayas obtained his Ph.D. in Physics of Light & Matter from Universidad Autónoma de Madrid (UAM, Spain) in October 2012. His thesis, supervised by Prof. Daniel Jaque, focused on luminescent sensing through rare earth-doped:YAG systems. From December 2012 to November 2016, he worked as a postdoctoral fellow in Prof. Fiorenzo Vetrone’s group at the INRS-EMT (Canada), directing his research to synthesis and characterization of light-emitting nanoparticles for imaging and thermometry. Nowadays, Dr. Benayas’ research is devoted to near-infrared luminescence/optoacoustic imaging and real-time sensing, targeting a broad set of biomedical applications. He has authored more than 40 peer-reviewed papers (h-index: 20, source: Google Scholar, August 2019), several conference proceedings, and 1 book chapter on luminescence nanothermometry. Dr. Benayas co-organized and chaired the Nanomaterials Working in the Near-Infrared: Biomedical Applications symposium (23-27th Oct. 2016, Materials Science and Technology Conference; Salt Lake City, USA).


Eva Hemmer received her Ph.D. in materials science in 2008 from Saarland University (Germany) under the mentorship of Prof. Sanjay Mathur. From 2009 to 2012, she worked on lanthanide-based nanoparticles for near-infrared bioimaging with Prof. Kohei Soga at the Tokyo University of Science (Japan). In 2013, she was awarded a Feodor Lynen Research Postdoctoral Fellowship by the Alexander von Humboldt Foundation (Germany) to develop lanthanide-based nanothermometers in the groups of Prof. Fiorenzo Vetrone and Prof. François Légaré at INRS-EMT (Université du Québec, Canada). In 2016, she joined the University of Ottawa (Canada) as an assistant professor at the Department of Chemistry and Biomolecular Sciences, where she is working on lanthanide-based nanocarriers for biomedical and energy conversion applications. Eva Hemmer has published more than 20 peer-reviews papers in internationally renowned journals as well as 2 book chapters (h-index: 14, source: Google Scholar, August 2019). She received the “2014 Global Young Investigator Award” and the “2018 Du-Co Ceramics Young Professional Award” of the American Ceramic Society.

Guosong Hong received his PhD in chemistry under the advice of Prof. Hongjie Dai from Stanford University, with his research focused on in-vivo deep-brain imaging with second near-infrared (NIR-II) fluorescence. He carried out postdoctoral studies with Prof. Charles M. Lieber at Harvard University, where he worked on the development of syringe-injectable, tissue-like electronics for l^11000 (h-index: 40, source: Google Scholar, August 2019). He is a recipient of the NIH Pathway to Independence (K99/R00) Award, and the MIT Technology Review ‘35 Innovators Under 35’ Award.

Daniel Jaque was awarded a Certificate in Physics from Sussex University in 1995 and defended his Ph.D. thesis at Universidad Autónoma de Madrid (UAM) in 1999. Later that year, he joined the Universidad Complutense de Madrid (UCM) as an assistant professor starting his research activity on superconducting nanostructures. In 2006, under the “Ramón y Cajal nationwide tenure program,” he was awarded the “Young Researcher Award” by the European Association for the Study of Rare Earths He has been an invited visiting professor at Heriot Watt University (UK), Universidade Federal of Alagoas (Brazil) and Swinburne University of Technology (Australia). In 2009, he co-founded the Fluorescence Imaging Group at Universidad Autonoma de Madrid and the Nanobiology Group at Ramon y Cajal Hospital (Madrid). He has focused on the design and development of novel multifunctional nanostructured materials for advanced biological studies including in vivo remote thermal sensing for advanced diagnosis and therapy. Dr. Jaque has published more than 340 papers in international peer reviewed journals with more than 12000 citations and an h-index of 55 (source: Google Scholar, August 2019).