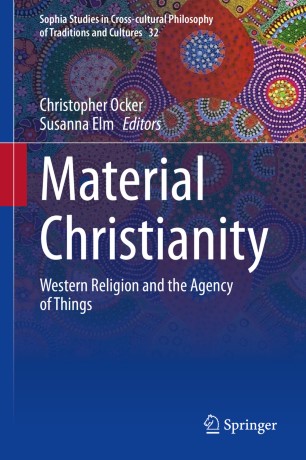 Western Religion and the Agency of Things

Part of the Sophia Studies in Cross-cultural Philosophy of Traditions and Cultures book series (SCPT, volume 32)

This collection of essays offers a series of rigorously focused art-historical, historical, and philosophical studies that examine ways in which materiality has posed and still poses a religious and cultural problem. The volume examines the material agency of objects, artifacts, and environments: art, ritual, pilgrimage, food, and philosophy. It studies the variable "senses” of materiality, the place of materiality in the formation of modern Western religion, and its role in Christianity’s dialogue with non-Western religions. The essays present new interpretations of religious rites and outlooks through the focus on their material components. They also suggest how material engagement theory - a new movement in cultural anthropology and archeology - may shed light on the cultural history of Christianity in medieval and early modern Europe and the Americas. It thus fills an important lacuna in the study of western religion by highlighting the longue durée, from the Middles Ages to the Modern Period, of a current dilemma, namely the divide between materialistic and what might broadly be called hermeneutical or cultural-critical approaches to religion and human subjectivity.

Christopher Ocker is Director of Medieval and Early Modern Studies and Professor at the Institute for Religion and Critical History of the Australian Catholic University in Melbourne. He was formerly Professor of History at the San Francisco Theological Seminary, the Chair of the Department of Historical and Cultural Studies of Religion at the Graduate Theological Union in Berkeley, and convener of the Muilenburg-Koenig History of Religion Seminar. He is interested in the history of religion in Europe, particularly in the medieval and early modern periods. His publications include Luther, Conflict, and Christendom: Reformation Europe and Christianity in the West (Cambridge 2018), Biblical Poetics before Humanism and Reformation (Cambridge 2002), Church Robbers and Reformers in Germany (Leiden 2006), and many articles on medieval Jewish-Christian conflict, the mendicant orders, medieval biblical exegesis, and the Reformation.
Susanna Elm is Sidney H. Ehrman Professor of History and Classics in the Department of History at the University of California at Berkeley. She has also recently served as the Hedi-Fitz-Niggli Professor at the University of Zürich. Her interests are the social, economic and cultural history of the later Roman empire. Her book, Sons of Hellenism, Fathers of the Church: Emperor Julian, Gregory of Nazianzus, and the Vision of Rome, Berkeley 2012, focused on the common matrix shared by late Roman pagans and Christians, and her current project, Sold to Sin: Augustine of Hippo on Slavery, Taxation, and Original Sin, will examine economic impact on the formulation of theology.