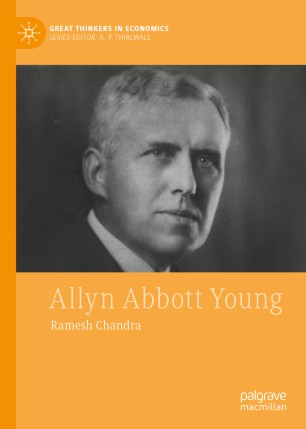 Allyn Young (1876-1929) was a deep thinker and achieved fame during his lifetime. His fame owes more to his style and influence as a teacher than his published work. His greatest fame as an author rests on a single economic paper on increasing returns and economic progress but he contributed much more as a mentor to his graduate students such as Frank Knight, Edward Chamberlin, and Lauchlin Currie at Harvard and to the undergraduate Nicholas Kaldor at the London School of Economics. He shot into international fame for his role as a member of the American delegation led by President Woodrow Wilson to negotiate peace at Paris after WWI. However, recent interest in Young is more due to his thought than to his contribution to the economics profession or public service. At the time of his death, he was working on two treatises, one on Money and the other on Economics. The one on Money was at a fairly advanced stage but no trace of either was found in his family’s hasty departure from London after his untimely death.

There is a general dearth of published material about Young, his thought and his life. His economic thought, apart from his views on growth theory and monetary economics, is relatively unknown. This volume offers a thematic approach to his contributions and biography.