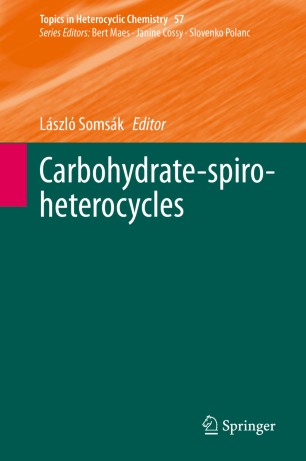 This volume is devoted to compounds in which the spiro centre is part of a pyranoid or furanoid or an iminosugar ring. The chapters contributed deal with methodological peculiarities of syntheses of natural and artificial sugar derived spirocycles as well as their biological applications and other utilities including marketed drugs. Carbohydrates are ubiquitous molecules in nature and participate in a vast number of biological interactions. Especially their conjugates with practically all kinds of primary and secondary metabolic small molecules (and also biomacromolecules) representing valuable tools for glycobiology research and also lead compounds for drug discovery. While monosaccharides per se appear as heterocycles, their natural conjugates frequently exhibit spiro(hetero)cyclic derivatives, in many cases of high therapeutical relevance. As a consequence, the field of carbohydrate-spiro-heterocycles attracts intense interest from both chemical and biomedical aspects therefore this volume will be of interest for synthetic and medicinal chemists and (glyco)biologists, as well as researchers involved in various biomedical fields.