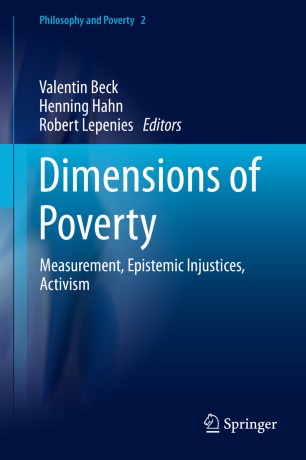 Part of the Philosophy and Poverty book series (PPOV, volume 2)

This anthology constitutes an important contribution to the interdisciplinary debate on poverty measurement and alleviation. Absolute and relative poverty—both within and across state boundaries—are standardly measured and evaluated in monetary terms. However, poverty researchers have highlighted the shortfalls of one-dimensional monetary metrics. A new consensus is emerging that effectively addressing poverty requires a nuanced understanding of poverty as a relational phenomenon involving deprivations in multiple dimensions, including health, standard of living, education and political participation.

This volume advances the debate on poverty by providing a forum for philosophers and empirical researchers. It combines philosophically sound analysis and genuinely global research on poverty's social embeddedness. Next to an introduction to this interdisciplinary field—which links Practical Philosophy, Development Economics, Political Science, and Sociology—it contains articles by leading international experts and early career scholars. The contributors analyse the concept of poverty, detail its  multiple dimensions, reveal epistemic injustices in poverty research, and reflect on the challenges of poverty-related social activism. The unifying theme connecting this volume's contributions is that poverty must be understood as a multidimensional and socially relational phenomenon, and that this insight can enhance our efforts to measure and alleviate poverty.

Valentin Beck is a Lecturer and Research Associate at the Institute of Philosophy at Freie Universität Berlin (2012-) and currently a Alexander von Humboldt Scholar at the University of California, Berkeley (2018-20). His research is in Political and Moral Philosophy and Economic Ethics. In his monograph Eine Theorie der globalen Verantwortung (Berlin: Suhrkamp 2016), he developed an approach to global responsibilities, especially regarding poverty and structural injustice.

Henning Hahn is a Visiting Professor for Political Philosophy and Ethics at Freie Universität Berlin and former global justice research fellow at Yale University. Henning was one of the initiators of the German chapter of ASAP (academics stand against poverty). His major research interests include global justice, world poverty, political reconciliation and human rights.

Robert Lepenies is a research scientist at the Helmholtz Centre for Environmental Research (UFZ), Leipzig, and member of the Global Young Academy. He works on the politics of nudging and on themes in the philosophy of the social sciences, international political economy and public policy (particularly environmental policy).