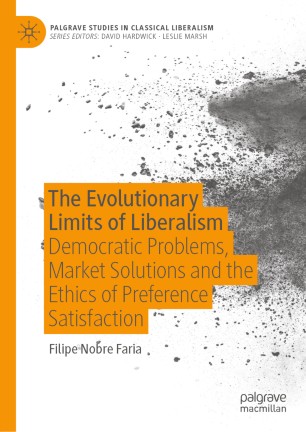 The Evolutionary Limits of Liberalism

Democratic Problems, Market Solutions and the Ethics of Preference Satisfaction

This book assesses the evolutionary sustainability of liberalism. The book’s central claim is that liberal institutions ultimately weaken their social groups in the evolutionary process of inter-group competition. In this sense, institutions relying on the liberal satisfaction of preferences reveal maladaptive tendencies. Based on the model of multilevel selection, this work appraises the capacity of liberal democracy and free markets to satisfy preferences. In particular, the book re-evaluates public choice theory’s classic postulate that free markets are a suitable alternative to the shortcomings of western liberal democracies regarding preference satisfaction. Yet, the book concludes that free markets are not a solution to the problems of liberal democracy because both market and democratic liberal institutions rest on the liberal satisfaction of preferences, an ethic which hurts group evolutionary fitness. This volume is of interest to political theorists, evolutionary ethicists, political economists and to general readers interested in the future of liberalism.