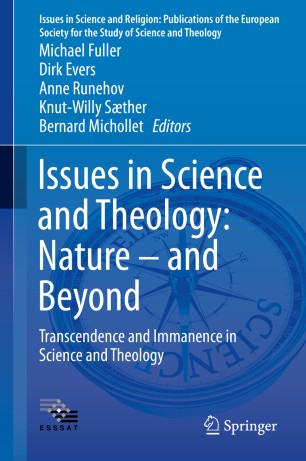 Issues in Science and Theology: Nature – and Beyond

Transcendence and Immanence in Science and Theology

Part of the Issues in Science and Religion: Publications of the European Society for the Study of Science and Theology book series (ESSSAT, volume 5)

This book addresses a variety of important questions on nature, science, and spirituality: Is the natural world all that there is? Or is it possible to move ‘beyond nature’? What might it mean to transcend nature? What reflections of anything ‘beyond nature’ might be found in nature itself?

Gathering papers originally delivered at the 2018 annual conference of the European Society for the Study of Science and Theology (ESSSAT), the book includes contributions of an international group of scientists, philosophers, theologians and historians, all discussing nature and what may lie beyond it.

More than 20 chapters explore questions of science, nature, spirituality and more, including

Issues in Science and Theology: Nature – and Beyond will benefit a broad audience of students, scholars and faculty in such disciplines as philosophy, history of science, theology, and ethics.

Michael Fuller has taught science and theology at the University of Edinburgh since 1998. He is the author of a monograph and numerous articles dealing with the interface of science and religion, and he has edited numerous symposia relating to this subject. He is a former Chair of the UK Science and Religion Forum, and Vice-President for Publications of the European Society for the Study of Science and Theology. He is an Anglican Priest, a Canon of St Mary’s Cathedral, Edinburgh, and for 15 years he was Pantonian Professor at the Theological Institute of the Scottish Episcopal Church. His research interests include ethical issues raised by new and emerging sciences.

Dirk Evers is Professor of Dogmatics and Philosophy of Religion at Martin-Luther-University Halle-Wittenberg, Germany. Before joining Halle University in 2010 as a faculty member, he worked as assistant professor at Tübingen University under Eberhard Jüngel. Since his doctoral thesis on cosmology and doctrine of creation in 2000 he has been doing interdisciplinary work at the intersection of science and theology. Since 2014 he has been president of ESSSAT (European Society for the Study of Science and Theology), and he is managing editor of the journal Philosophy, Theology, and the Sciences.