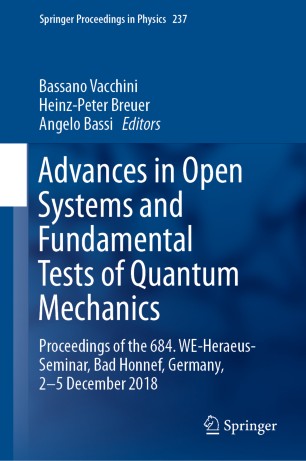 Advances in Open Systems and Fundamental Tests of Quantum Mechanics

Quantum mechanics has shown unprecedented success as a physical theory, but it has forced a new view on the description of physical reality. In recent years, important progress has been achieved both in the theory of open quantum systems and in the experimental realization and control of such systems. A great deal of the new results is concerned with the characterization and quantification of quantum memory effects.

From this perspective, the 684. WE-Heraeus-Seminar has brought together scientists from different communities, both theoretical and experimental, sharing expertise on open quantum systems, as well as the commitment to the understanding of quantum mechanics.

This book consists of many contributions addressing the diversified physics community interested in foundations of quantum mechanics and its applications and it reports about recent results in open quantum systems and their connection with the most advanced experiments testing quantum mechanics.