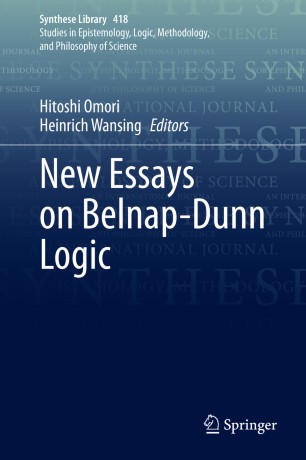 This edited volume collects essays on the four-valued logic known as Belnap-Dunn logic, or first-degree entailment logic (FDE). It also looks at various formal systems closely related to it. These include the strong Kleene logic and the Logic of Paradox. Inside, readers will find reprints of seminal papers written by the fathers of the field: Nuel Belnap and Michael Dunn. In addition, the collection also features a well-known but previously unpublished manuscript of Dunn, an interview with Belnap, and a new essay by Dunn.

Besides the original, monumental papers, the book also includes research by leading scholars. They consider the extraordinary importance of Belnap-Dunn logic from several perspectives. They look at how, philosophically, it has served as a basic system of inconsistency-tolerant reasoning, as the core of underlying logics for theories based on dialetheism, and, more recently, for theories based on Buddhist philosophy. Coverage also explores its contributions to computer science, such as knowledge representation and information processing.

This mix of seminal papers and insightful analysis by top scholars offers readers a comprehensive outlook on Belnap-Dunn logic and its related expansions, which have been agenda setting for the debate on philosophical logic as well as philosophy of logic. The book will also enhance further discussion on the philosophical issues related to nonclassical logics in general.

Hitoshi Omori is a postdoctoral researcher in logic at Kyoto University (Japan). He took his M.A. and Ph.D. in Logic at Tokyo Institute of Technology (Japan). After the completion of Ph.D., he was a postdoctoral researcher at Kobe University (Japan) and City University of New York (USA) before coming to Kyoto. His main interest is in philosophical logic, including paraconsistent, many-valued and modal logics, and dialetheism. Website: https://sites.google.com/site/hitoshiomori/home
Heinrich Wansing is a Professor of Logic and Epistemology at the Ruhr-University Bochum (Germany). Before that he was a Professor of Philosophy of Science and Logic at Dresden University of Technology (1999–2010). He took his M.A. and his Ph.D. in Philosophy at the Free University of Berlin and his Habilitation in logic and analytical philosophy at the University of Leipzig. He is the author of “The Logic of Information Structures” (Springer 1993), “Displaying Modal Logic” (Kluwer 1998), “Truth and Falsehood. An Inquiry into Generalized Logical Values” (with Y. Shramko, Springer 2011), “Proof Theory of N4-related Paraconsistent Logics” (with K. Kamide, College Publications 2015) and numerous articles in professional journals. Heinrich Wansing has been working mainly on philosophical logic, including the semantics and proof theory of modal, constructive, paraconsistent, many-valued, and other nonclassical logics. Moreover, he is the Editor-in-Chief of the book series Trends in Logic (Springer), a managing editor of the journal Studia Logica, and a member of a number of other editorial boards of logic and philosophy journals. Website: http://www.ruhr-uni-bochum.de/philosophy/logic/