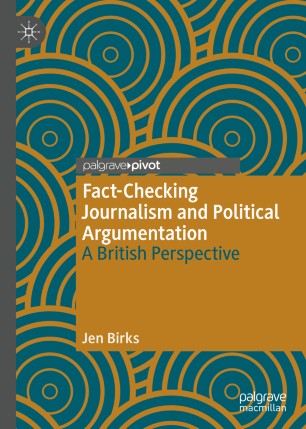 “Dr Birks eloquently guides the reader through a complex field of mediated post-truth politics in an engaging and accessible critique of fact checking journalism. In this book we are treated to a highly sophisticated analysis of the dynamics and epistemologies of fact checking journalism, with detailed examples from a UK perspective, where Birks demonstrates the importance of understanding fact-checking in relation to the quality of political debate. The book is essential reading for anyone wanting to understand the contested nature of fact and truth claims in journalism today.”

“In an era of post-factual democracy, fact-checkers should act as an antidote to politician’s ‘bullshit’, helping citizens to make informed choices. Birks’ important research is a must read for anyone seeking to understand fact checkers or create a fact check system that plays a role in monitoring the health of democratic debate.”

This timely book examines the role of fact-checking journalism within political policy debates, and its potential contribution to public engagement.  Understanding facts not to operate in a political vacuum, the book argues for a wide remit for fact-checking journalism beyond empirically-checkable facts, to include the causal relationships and predictions that form part of wider political arguments and are central to electoral pledges.  Whilst these statements cannot be proven or disproven, fact-checking can, and sometimes does, ask pertinent critical questions about the premises of those claims and arguments.  The analysis centres on the three dedicated national British fact-checkers during the UK’s 2017 snap general election, including their activity and engagement on Twitter. The book also makes a close political discourse and argumentation analysis of three key issue debates in flagship reporting from Channel 4 News and the BBC.