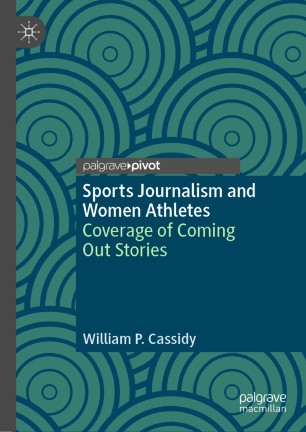 Coverage of Coming Out Stories

“Women’s sports have typically been grossly under-represented in sports media coverage. Although elite lesbian athletes far outnumber ‘out’ male athletes, media scrutiny of their experiences remains largely non-existent. Largely situated in the context of improved cultural attitudes toward sexual minorities across the West, Bill Cassidy’s Sports Journalism and Women Athletes: Coverage of Coming Out Stories is, therefore, a valuable contribution to the study of sports journalism and media, offering – for the first time – a dedicated and detailed account of the coming out of some of sports’ most high-profile lesbian athletes.”

This book examines sports journalism coverage of the coming out stories of three prominent women athletes: tennis legend and feminist icon Billie Jean King, Basketball Hall of Fame Member Sheryl Swoopes and WNBA champion Brittney Griner. When King was outed in 1981 it marked a pivotal moment in which journalists were forced to discuss lesbian athletes in sports for the first time. Swoopes’ 2005 coming out was hailed as a historic moment due to her status as one of the best women’s basketball players of all time, while Griner’s casual public acknowledgment of her sexuality came during what many have called a more receptive environment for gay and lesbian athletes. By directly analysing and comparing the media attention given to these three superstars, Cassidy provides a comprehensive overview of how journalists have historically addressed women and lesbian athletes in professional sports. This book will appeal to readers interested in sports journalism, the role of sport in society and media coverage of gay athletes.