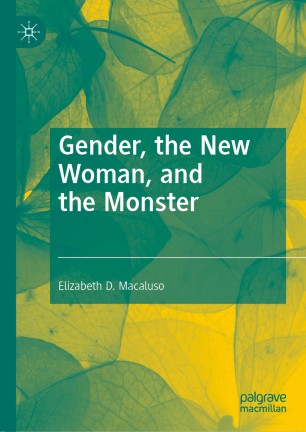 Gender, the New Woman, and the Monster

This book views late Victorian femininity, the New Woman, and gender through literary representations of the figure of the monster, an appendage to the New Woman. The monster, an aberrant occurrence, performs Brecht’s “alienation effect,” making strange the world that she inhabits, thereby drawing veiled conclusions about the New Woman and gender at the end of the fin-de-siècle. The monster reveals that New Women loved one another complexly, not just as “friend” or “lover,” but both “friend” and “lover.” The monster, like the fin-de-siècle British populace, mocked the New Woman’s modernity. She was paradoxically viewed as a threat to society and as a role model for women to follow. The tragic suicides of “monstrous” New Women of color suggest that many fin-de-siècle authors, especially female authors, thought that these women should be included in society, not banished to its limits.

This book, the first on the relationship between the figure of the monster and the New Woman, argues that there is hidden complexity to the New Woman. Her sexuality was complicated and could move between categories of sexuality and friendship for late Victorian women, and the way that the fin-de-siècle populace viewed her was just as multifarious. Further, the narratives of her tragedies ironically became narratives that advocated for her survival.

Elizabeth D. Macaluso teaches and tutors writing at Queensborough Community College, USA. She previously taught Victorian and British fin-de-siècle literatures and topics in rhetoric and composition at Binghamton University, USA. This is her first critical book on the late Victorian period. Macaluso is also a published poet, with poetry featured in VIA, Arba Sicula,  The Paterson Literary Review, and the San Diego Poetry Annual. Her first volume of poetry, The Lighthouse, will be published by Guernica Editions. Macaluso has earned The Dr. Alfred Bendixen Award for Distinguished Teaching by a Graduate Student in English and the Graduate Student Excellence Award in Teaching for her work with Binghamton University undergraduates. She has attended numerous conferences on her critical and creative work.