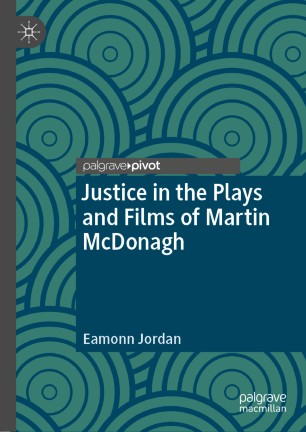 Justice in the Plays and Films of Martin McDonagh

“Eamonn Jordan’s comprehensive exploration of how certain forms of justice, and its institutional enactment, figure in the many works of Martin McDonagh offers an invaluable critical guide to an oeuvre that engages deeply, and often enigmatically, with legal and philosophical questions.”

-          R. Barton Palmer, Professor of Literature at Clemson University and author or editor of notable books including After Hitchcock: Influence, Imitation, and Intertextuality (2006).

This book interrogates the various manifestations of rival systems of justice in the plays and films of Martin McDonagh, in analysis informed by the critical writings of Michael J. Sandel, Steven Pinker, Julia Kristeva, and in particular Amartya Sen on violence, justice, equality and the law. In McDonagh’s works, failures to investigate adequately criminal actions are matched by multiple forced confessions and umpteen miscarriages of justice. The author explores McDonagh’s creative worlds as ones where distinctions between victim and perpetrator and guilt and innocence are precarious, where the burden of truth seldom reaches the threshold of beyond reasonable doubt and where the punishments and rewards of justice are applied randomly. This project considers the abject nature of justice in McDonagh’s writing, with the vast implications of justice being fragile, suspect, piecemeal, deviant, haphazard and random. Tentative forms of justice are tempered and then threatened by provocative, anarchic and abject humour. As the author argues, McDonagh’s writing cleverly circulates rival, incompatible and comparative systems of justice in order to substantiate the necessities and virtues of justice.