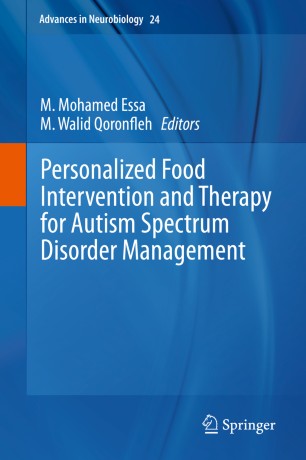 Part of the Advances in Neurobiology book series (NEUROBIOL, volume 24)

The book focuses on implications of traditional and processed foods for autism spectrum disorder (ASD) intervention and management. Numerous phytonutrients and pharmacologically active compounds in edible natural products and diet could influence and offer protection to neuronal dysfunction that occurs due to ASD.

The neuroprotective effects of various fruits, vegetables, nuts and seeds phytochemicals, and other natural bioactive ingredients against ASD and related conditions are discussed. Topics such as the possible neuroprotective mechanism of action of these foods and the therapeutic role of antioxidants in relation to ASD are addressed. This book also highlights the scope of using anti-inflammatory agents and antioxidants to promote neurogenesis and improve other symptoms in ASD. It emphasizes personalized nutritional approaches with dietary management of neurodevelopmental disorders/ASD cases.

Information in this book is relevant to researchers in the field of complementary and alternative medicine, nutraceuticals, neuroscience, agriculture, nutrition, and food science. This volume is beneficial to students of varying levels, and across multiple disciplines.

Dr. Musthafa Mohamed Essa, Ph.D., is an Associate Professor of Nutrition at Sultan Qaboos University, Oman and holding visiting A/Prof position in Neuropharmacology group, ASAM, Macquarie University, Sydney, Australia. He is an Editor-in-Chief for International Journal of Nutrition, Pharmacology, Neurological Diseases published by Wolters & Kluwer, USA. He is also acting as an Associate Editor for BMC complementary and alternative medicine and Editor for Frontiers in Biosciences. Dr. Essa is involved in the editorial / reviewer board of various well known journals such as Frontiers in Neurology, Biochemie, PLOS one, etc. Dr. Essa is conducting research on the effect of dietary supplementation of natural products on Neurodegenerative diseases. He is an expert in the field of Nutritional Neuroscience/ Neuropharmacology and published more than 120 papers, 46 book chapters and 11 books. He has strong international collaborations with institutes in USA, Australia, Qatar, and India. In 2015, Dr. Essa founded a new foundation named “Food and Brain Research Foundation” to support research in nutritional neuroscience.

He has over 15 years of research and teaching experience and till now he has received many research grants from local and international agencies in the area of Neuropharmacology and nutritional neurosciences (approximately 1.31 million USD). He has guided 3 PhD students and 9 master students. Currently he is guiding 2 PhD students in the area of Nutritional Neuroscience.

Immediately prior to WISH, Walid was the Biotechnology Development Director at Hamad Bin Khalifa University - Qatar Biomedical Research Institute (HBKU-QBRI). Dr. Qoronfleh has over 20 years of scientific, technology, business, and commercial experience. He has held several senior management and executive positions with increasing responsibilities at GlaxoSmithKline (GSK), Sanofi, US National Institutes of Health–National Cancer Institute (NIH-NCI), ThermoFisher, NextGen Sciences (VP, Personalized Medicine) and SDIX (Executive Director, Diagnostics business, Nasdaq: SDIX) and Executive Director & PI at The University of Michigan – Ann Arbor. Dr. Qoronfleh has been awarded two pioneering grants. As a PI at the University of Michigan – Ann Arbor he was awarded $3.2M to build a state-wide medical research infrastructure by The Michigan Development Economic Corporation (MEDC). Previously, while at ThermoFisher-Senior Director R&D, as a co-applicant (co-PI/Investigator) he was awarded a 7-year NIH grant with the Medical College of Wisconsin (MCW) to establish a proteomic center ($16.0M).

Dr. Qoronfleh is also involved on different levels in Government-University-Industry partnerships through research, technology and commercialization as well as higher education, research capacity building and grant program management. Dr. Qoronfleh brings expertise in economic development and business improvement in knowledge-based economy (Leadership, Entrepreneurship & Innovation) where he also lectures locally and at HEC Paris in Qatar. Dr. Qoronfleh was an active member of the Arab Expatriate Scientists group in Qatar. He is also one of the main co-authors for the planning document for the establishment of Qatar Biomedical Research Institute (QBRI), which was developed in collaboration with leading Arab expatriate scientists and scientists in Qatar (2007-2008).

Dr. Qoronfleh is the founder of three biotechnology companies in the USA (HT Expression, Q-Pharma & Minerva Bioscience), and he is a co-founder and the managing director of the US-based boutique consulting company Q3CG. Dr. Qoronfleh has published over 100 combined peer reviewed abstracts and papers. He is also an editor and an ad hoc reviewer for various scientific journals plus a frequent speaker at national and international conferences. He holds post-graduate degrees from The University of Louisville–School of Medicine, Penn State University, and The University of Wisconsin–Madison.