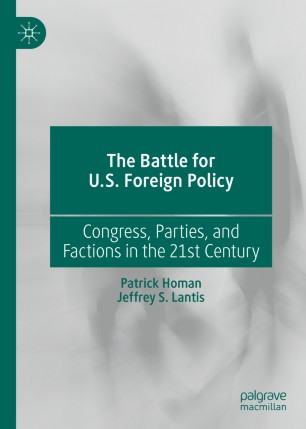 Congress, Parties, and Factions in the 21st Century

This book is an original study of the contemporary debate over U.S. foreign policy between the president, members of Congress, and political parties. Specifically, it examines how factions at the ideological extremes within parties such as the Tea Party, the Freedom Caucus, and Progressive Democrats can play significant roles in shaping U.S. foreign policy. In today’s polarized atmosphere whereAmericans seem increasingly divided, factions are emerging as powerful insurgents, innovators, and engines of change. The book develops a minority theory of influence that recognizes the importance of traditional and nontraditional strategies including persuasion, legislation, and issue framing. Original case studies explore factions at work in foreign policy development during the Barack Obama and Donald Trump administrations, including struggles over immigration policy, trade agreements, development aid, and foreign policies toward Iran and Syria. The Battle for U.S. Foreign Policy captures the spirit of ideological and practical party struggles and fills a substantial gap in foreign policy analysis literature.

Jeffrey Lantis is Professor of Political Science and Chair of the Global & International Studies Program at The College of Wooster, USA