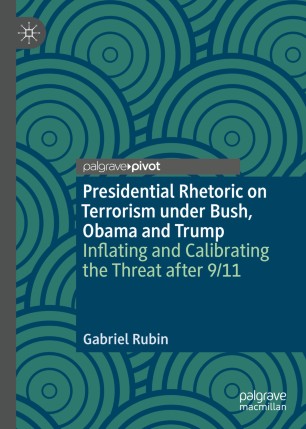 Presidential Rhetoric on Terrorism under Bush, Obama and Trump

Inflating and Calibrating the Threat after 9/11

Through the analysis of eighteen years of presidential data, this book shows how Presidents Bush, Obama, and Trump have conducted and framed the war on terror since its inception in 2001. Examining all presidential speeches about terrorism from George W. Bush’s two terms as President, Barack Obama’s two terms as President, and Donald Trump’s first year as President, this book is the first to compare the three post-9/11 presidents in how they have dealt with the terror threat. Presidential Rhetoric on Terrorism under Bush, Obama, and Trump argues that when policies need to be “sold” to the public and Congress, presidents make their pertinent issues seem urgent through frequent speech-making and threat inflation. It further illustrates how after policies are sold, a new President’s reticence may signify quiet acceptance of the old regime’s approach. After examining the conduct of the war on terror to date, it concludes by posing policy suggestions for the future.

Gabriel Rubin is Associate Professor of Justice Studies at Montclair State University, USA. He received his Ph.D. in Political Science from the Massachusetts Institute of Technology, USA and is the author of Freedom and Order: How Democratic Governments Restrict Civil Liberties after Terrorist Attacks—and Why Sometimes They Don’t (2011).