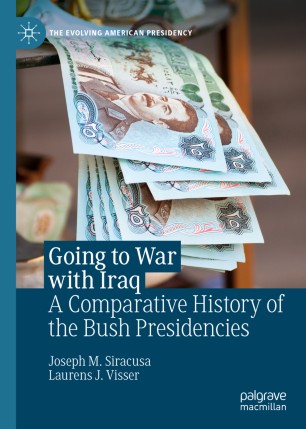 Going to War with Iraq

A Comparative History of the Bush Presidencies

Going to War with Iraq: A Comparative History of the Bush Presidencies is the account of two United States presidents and their decision to intervene militarily in Iraq, examining the comparative domestic and international contexts in which the decisions to go to war were made by George H. W. Bush and his son George W. Bush. This book centers specifically on the issue of Saddam Hussein at home and abroad, in the lead up to hostilities with Iraq in 1991 and 2003, respectively. For George H.W. Bush, in 1991, the threat posed by Saddam came from his perceived capabilities as Iraq's leader, whereas for George W. Bush, in 2003, it was the threat posed by Saddam's perceived intentions as Iraq's leader. In both cases, the result was war with Iraq.

Joseph M. Siracusa is Professor of Human Security and International Diplomacy at Royal Melbourne Institute of Technology University, Australia. He is the author of numerous works, including: Richard M. Nixon and European Integration and Presidential Doctrines: US National Security from George Washington to Barack Obama.

“Going to War with Iraq offers a comparative history of the 1991 and 2003 Iraq Wars, covering the diplomatic and domestic origins in ways not seen elsewhere. This book is well-conceived, well-researched, well-written. A must-read for historians and those with ongoing interest in real-world questions like why countries get involved in conflict.” (Sarah Kreps, Professor of Government, Cornell University, USA)
Buy options