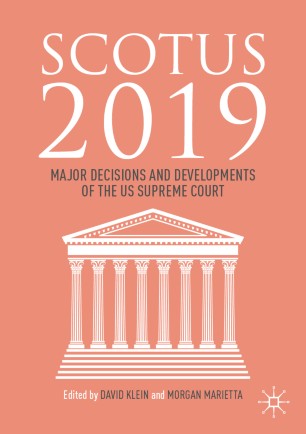 Major Decisions and Developments of the US Supreme Court

Each year, the Supreme Court of the United States announces new rulings with deep consequences for our lives. This second volume in Palgrave’s SCOTUS series explains and contextualizes the landmark cases of the US Supreme Court in the term ending 2019. With a close look at cases involving key issues and debates in American politics and society, SCOTUS 2019 tackles the Court's rulings on religions monuments, the census citizenship question, race in jury selection, double jeopardy, the rights of sex offenders, Fourth Amendment protection for blood alcohol tests, the death penalty, partisan gerrymandering, deference to federal agencies, excessive fines under the Eighth Amendment, and more. Written by notable scholars in political science and law, the chapters in SCOTUS 2019 present the details of each ruling, its meaning for constitutional debate, and its impact on public policy or partisan politics. Finally, SCOTUS 2019 offers an analysis of the controversial Justice Brett Kavanaugh's first term in office, as well as a big-picture look at the implications of the Court's decisions for the direction of this new Roberts Court.
David Klein is Professor and Head of the Department of Political Science at Eastern Michigan University, USA.

Morgan Marietta is Associate Professor of Political Science at the University of Massachusetts Lowell, USA.