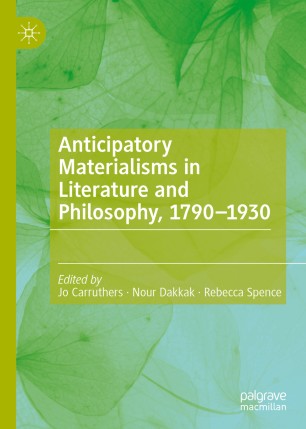 Anticipatory Materialisms in Literature and Philosophy, 1790–1930

“Anticipatory Materialisms is a timely interdisciplinary collection that draws together ethics, politics and poetics to reimagine and interrogate human precedence in the material world. It presents both a profound and provocative engagement with literature and philosophy to assert the general interdependence of all matter in the natural world.”

Anticipatory Materialisms explores nineteenth and early twentieth-century literature that pre-empts the recent philosophical ‘turn’ to materiality and affect. Critical volumes that approach literature via the prism of new materialism are in the ascendence. This collection stakes a different claim: by engaging with neglected theories of materiality in literary and philosophical works that antedate the twentyfirst century ‘turn’ to new materialism and theories of affect, the project aims to establish a dialogue between recent and earlier conceptualisations of people-world relations. The essays collected here demonstrate the particular and meaningful ways in which interactions between people and the physical world were being considered in literature between the nineteenth and early twentieth centuries. This book does not propose an air of finality; indeed, it is our hope that by offering provocative and challenging chapters, which approach the subject from various critical and thematic perspectives, the collection will establish a broader dialogue regarding the ways philosophy and literature have intersected and informed each other over the course of the long nineteenth century.

Jo Carruthers teaches English Literature at Lancaster University and has published widely in the areas of literary studies, aesthetics, and religious and national identities. Her books include: England’s Secular Scripture: Islamophobia and the Protestant Aesthetic (2011) and The Politics of Purim: Purim: Law, Sovereignty and Hospitality in the Aesthetic Afterlives of Esther (2020). Nour Dakkak teaches literature, arts and humanities at the Arab Open University in Kuwait. Her research is centred on everyday human-world relations in nineteenth and twentieth-century literature and culture. She has published chapters in several volumes including Mobilities, Literature, Culture (2019) and “Only Connect”: E. M. Forster’s Legacies in British Fiction (2017). Rebecca Spence is an AHRC-funded PhD candidate and associate lecturer in the Department of English and Creative Writing at Lancaster University. Her research argues for an associative relationship between listening and sympathy in the nineteenth-century novel, with a focus on the work of George Eliot, Thomas Hardy and Henry James.