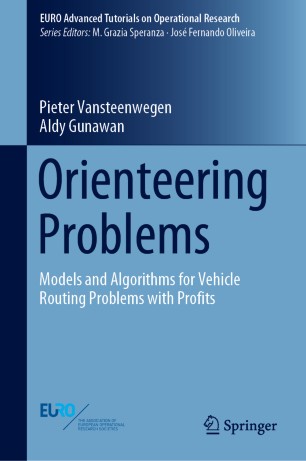 Models and Algorithms for Vehicle Routing Problems with Profits

This tutorial introduces readers to several variants of routing problems with profits. In these routing problems each node has a certain profit, and not all nodes need to be visited. Since the orienteering problem (OP) is by far the most frequently studied problem in this category of routing problems, the book mainly focuses on the OP. In turn, other problems are presented as variants of the OP, focusing on the similarities and differences. The goal of the OP is to determine a subset of nodes to visit and in which order, so that the total collected profit is maximized and a given time budget is not exceeded.

The book provides a comprehensive review of variants of the OP, such as the team OP, the team OP with time windows, the profitable tour problem, and the prize-collecting travelling salesperson problem. In addition, it presents mathematical models and techniques for solving these OP variants and discusses their complexity. Several simple examples and benchmark instances, together with their best-known results, are also included. Finally, the book reviews the latest applications of these problems in the fields of logistics, tourism and others.